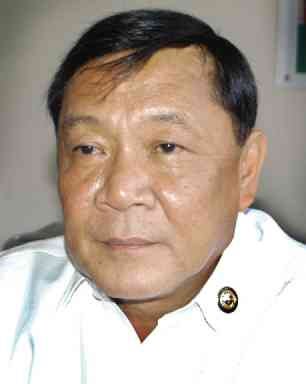 The antigraft court Sandiganbayan ordered the suspension for 90 days of Pangasinan Rep. Amado Espino Jr. (fifth district) for involvement in illegal black sand mining in his province while he was still the governor.

In March, Espino was charged with two counts of graft at the Sandiganbayan for giving permits to illegal black sand mining in Pangasinan from 2011 to 2013 along the Lingayen Gulf, an environmentally critical area.

The governor-turned-congressman pleaded not guilty when arraigned on July 14.

In a resolution dated Sept. 7 but issued on Thursday, the Sandiganbayan’s Sixth Division said the 90-day preventive suspension is mandatory for anyone charged with graft.

“Accused Espino is hereby directed to cease and desist from further performing and exercising the functions, duties and privileges of his position as congressman of the fifth district of Pangasinan… effective immediately upon receipt hereof and continuing for a period of 90 days,” the antigraft court order said.

The court directed the speaker of the House of Representatives to enforce the suspension order.

The Sandiganbayan also directed the speaker to inform the court, within five days from receiving a copy of the order, about the dates of the start and end of the suspension.

According to the Ombudsman, a small-scale mining permit was issued to Alexandra Mining in June 2011 but later canceled, and the firm was ordered to vacate the Lingayen Gulf area.

In August 2011, Espino entered into an agreement with Xypher Builders to remove the metallic materials from the stockpile left behind by Alexandra Mining.

The extraction of the magnetite or black sand took place from 2011 to 2013 within an area that was enclosed by the provincial government with a 3-kilometer-long, 6-foot-high concrete wall that spans the coastal barangays of Sabangan, Estanza and Malimpuec.

According to resident Rolando Rea, 72, who filed the complaint at the Ombudsman, the provincial government made it appear that the wall was part of a planned golf course along the coast of Lingayen, but the wall actually served to keep residents from witnessing the illegal black sand mining.

Rea continues to complain against the existence of the wall, which he said deprived residents, especially fishermen, of access to the sea.

The Ombudsman held Espino, Baraan and Bigay criminally liable for issuing permits and transacting with Alexandra Mining and Xypher Builders when these were not accredited contractors or qualified to undertake mining activities.

Espino had also been named by President Duterte as among dozens of government officials involved in the drug trade.

Espino had denied the accusation.

He was linked to a drug syndicate supposedly operating from the National Bilibid Prison during the time as justice secretary of now Sen. Leila de Lima.