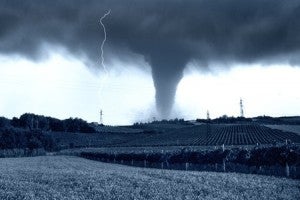 CEBU CITY —  At least three persons were injured while 17 houses were damaged after a tornado hit Barangay Odlot in Bogo City in northern Cebu on Wednesday.

Odlot Barangay Captain Emily Juanillo said strong winds turned a house upside down while another was broken into pieces.

“It was a good thing that the houses were unoccupied,” she said in an interview over radio station dyAB.

Tabada said the tornado developed on land and lasted for about 20 to 30 minutes before it dissipated.

Tornados are common during the thunderstorm months of May to September and develops when there are tropical depressions, according to Tabada.

The low pressure area (LPA) in Mindanao has been causing rains in Cebu and the rest of the Visayas since Wednesday.

Based on the 4 p.m. weather forecast, the LPA was spotted about 40 kilometers of Lumbia in Cagayan de Oro City.

When a thunderstorm occurs, hot air rises, and the meeting of the hot air with cold air in the atmosphere triggers air expansion and the formation of a funnel-shaped whirldwind, according to Tabada.

Tabada said it had rained in Metro Cebu and northern Cebu area since about 11 a.m. on Wednesday, which could have led into the whirlwind formation.

Juanilla, who was then at the Our Lady of Remedios Parish when the tornado hit at about 4:30 p.m., said they saw the whirlwind forming on land and on the parish’s right side.

It later hit Sitios Proper 1 and Proper 2 in Barangay Odlot, one of Bogo City’s 29 barangays.

“The wind was twirling. We saw the plants and roofs flying,” she said.

Juanilla said strong wind was felt in their area for about a minute or two.

Juanilla said at least three Odlot residents were injured in the twister. Two were onboard a tricycle which strong winds hit.

Baltazar Tribunalo, head of the Provincial Disaster Risk Reduction Management Office (PDRRMO), said clearing operation was implemented on Wednesday night to make sure that barangay roads were free of obstruction.

Power that was temporarily cut off when the tornado hit about 4:30 p.m. was also restored Wednesday evening.  SFM