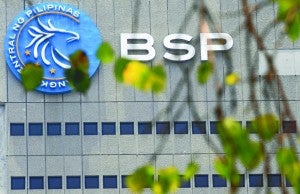 MANILA — A further hike in the volume of term deposit facility (TDF) being offered by the Bangko Sentral ng Pilipinas is likely as Wednesday’s auction was again oversubscribed.

For the 28-day facility, the BSP accepted a yield ranging between 2.5 and 2.525 percent, while the accepted yield remained at 2.5 percent for the seven-day.

“The results of the auction today are not unexpected. There is room to further increase the auction size going forward so that more funds could migrate from the ODF to the TDF,” BSP Governor Amando M. Tetangco Jr. said in a text message to reporters, referring to the overnight deposit facility.

“An adjustment in the RRR can be considered down the road when, among others, more funds have migrated to the TDF and if credit conditions warrant,” Tetangco added, referring to the reserve requirement ratio.

Last week, Tetangco said they have been seeing gains in mopping up excess liquidity in the system through the weekly TDF auctions as part of the implementation of the interest rate corridor (IRC).

Since June, the BSP has been holding weekly TDF auctions under the IRC, aimed at mopping up excess liquidity and tempering volatility in market rates by moving them towards the policy rate of 3 percent.

The BSP had made operational adjustments ahead of the implementation of the IRC.

The BSP kept the overnight deposit facility or the former special deposit accounts (SDA) rate of 2.5 percent, which serves as the lower bound of the corridor.

The BSP will also offer a total of P90 billion—P10 billion in seven-day term deposits and P80 billion in 28-day—on Sept. 14 and 21, the latest advisory on its website showed.  SFM