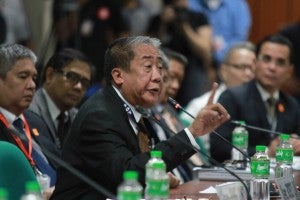 In a letter to the Philippine Daily Inquirer,  Mercado-Santos said Tugade never said ‘Traffic is just a state of mind.”

“What the Secretary is asking, is a change of psyche, a platform of cooperation for citizens to be part of the solution, for Filipinos to simply be truthful,” Mercado-Santos pointed out.

‘State of mind adds to the problem’

The Inquirer stands by its story pertaining to the Secretary’s remarks which were part of his speech and which he later confirmed and even repeated in a chance interview when he was asked to clarify his statement.

“Even when there (was) no traffic, (people) say there was,” Tugade scoffed during the launch on Tuesday of the premium bus service at Ninoy Aquino International Airport.

“A state of mind adds to the problem of traffic,” he stressed. “Let’s stop blaming traffic. If you’re late, that’s that.”

Tugade added: “One thing we will have to address in solving traffic: change your psyche. Change your psyche (that allows) you to every now and then use as a convenient excuse that one word: traffic.”  SFM