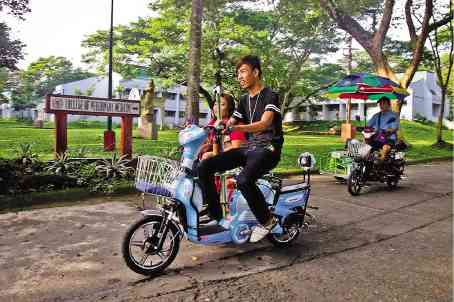 E-BIKES provide passengers comfort as they go around the tree-lined campus of the University of the Philippines Los Baños in Laguna. KIMMY BARAOIDAN

Under a colorful beach umbrella propped up on a sidecar, Daniel Millares played the latest love songs from a cheap stereo tucked in a bike hamper.

Millares, 24, looked neat and fresh for someone already on his fourth trip that day down the bumpy road in the village of Putho-Tuntungin in Los Baños, Laguna province.

Millares, a father of two, has been driving a pedicab for a living for six years. He blames the physically taxing job for his thin legs, not to mention his change of clothes several times in a day.

“Gone are the days of sweaty shirts,” he said. The job became easier after he and his fellow drivers ditched the padyak (pedals) for electric-powered bikes or e-bikes starting late last year.

The 2-kilometer route off the campus of the University of the Philippines Los Baños (UPLB) is now filled with e-bikes. Most of the 162 pedicab drivers have switched to the battery-operated vehicles.

“It used to take me 30 minutes waiting in line for a ride. Now, pedicabs are always available. Drivers are also not stinking [from sweat] anymore,” she added.

The route starts from UPLB’s Animal Science building and heads toward Putho-Tuntungin, a relatively remote and middle-income community. Fare for the full distance is P20, with UPLB employees and students among the usual passengers.

Millares said there are also tourists who frequent the university’s dairy bar or take pedicabs as they enjoy the rustic scenery of cattle herds and Mt. Makiling.

“We are particular about being noise-free since we enter [a part of] UPLB campus and we do not want to disturb classes,” said Bernardito Regis, president of Putho Tuntungin Pedicab Operators-Drivers’ Association. Since the e-bike does not use fuel, “we are also eco-friendly.”

Regis, 56, settled in Los Baños after losing his farm to  Supertyphoon “Yolanda” (international name: Haiyan) in Tacloban City in 2013. He volunteered for the barangay council’s climate change initiatives and also became an officer of an organic farmers’ association in Laguna.

The suppliers also regularly send their technicians to take care of kinks on the e-bikes.

For Millares, using an e-bike, which runs at a minimum speed of 35 km per hour, gives him extra time and energy to manage his small bigasan (rice mill) and loan business. The e-bike comes complete with a digital battery gauge, horn and flashlight.

“Now, even senior citizens find themselves back on the road,” Regis said. The oldest driver is 72 years old and two drivers are women.

Batteries charged for four hours stay good for the entire day. But in case the battery is drained, “we can always go back to padyak,” Regis said.

To regulate trips, the group implements a coding system, allowing a certain number of pedicabs plying at a certain period according to plate numbers.

Putho-Tuntungin made it in the news in 2013 due to cases of rape and killing in the area. A suspect in one of these cases was a pedicab driver.

But Regis said his group were taking initiatives to ensure the safety of their passengers.

Drivers are screened to make sure they have no derogatory records. They are also issued identification cards from the Land Transportation Franchising and Regulatory Board and UPLB before they are allowed to ply the route.

“I’d like to think we are a pioneer [in the use of e-bikes as public transportation],” Regis said. “Maybe this should [qualify] us [for a spot] in [the] Guinness [World Records],” he said.