The making of Pampanga megalopolis 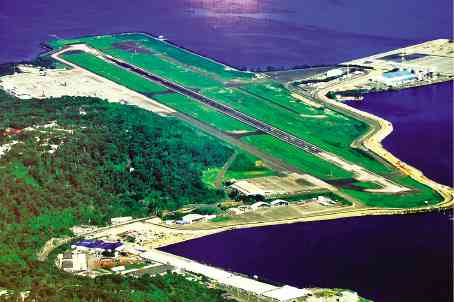 AN AERIAL view of the Subic Bay International Airport, formerly known as the US Air Station at Cubi Point. Below is a map showing the proposed megalopolis. PHOTO REPRODUCTION

ARCHITECT Felino Palafox Jr. is doing what local leaders describe as an important task pro patria (for country). In three months, the urban planner will have already completed the study and designs for what he calls the Pampanga Megalopolis.

A megalopolis is a mega city or a chain of adjacent metropolitan areas.

To Palafox, the development of the triangle of the City of San Fernando-Lubao, Angeles-Clark Freeport, and Porac-Subic Bay Freeport makes up a super city for Pampanga, and could evolve into one of the country’s most sustainable growth centers.

But in the visioning of this so-called Golden Corridor, at least in the medium-term or up to 2021, Pampanga Gov. Lilia Pineda wants the province to avoid the urban ills of Metro Manila, such as land and air traffic, housing backlogs, water shortage and environmental decay, while it addresses its own, such as flooding.

The megalopolis idea fits into the advocacy of the Pampanga Chamber of Commerce and Industry (PamCham), which has been urging the government to decongest Metro Manila for the sake of the whole country.

“If Metro Manila experiences an earthquake of magnitude 7 due to the movement in the West Valley Fault, the whole country would be on its knees. The government shouldn’t be putting all its eggs in one basket,” said Levy Laus, chair emeritus of PamCham.

“We’re too glad that President Duterte is pushing to decongest Metro Manila,” he said, referring to the administration’s plans to transfer several flights from Ninoy Aquino International Airport (Naia) in Pasay City to Clark International Airport (CRK) in Pampanga and a fast railway connecting the two gateways.

In a meeting with PamCham leaders, regional directors of government agencies and elected officials, including former president and now Pampanga Rep. Gloria Macapagal-Arroyo, on Aug. 24, Palafox said almost everybody looks to Transportation Secretary Arthur Tugade as a staunch advocate of the Clark-Subic potentials in logistics.

He said Tugade realized these when he served as president of the state-owned Clark Development Corp. during the Aquino administration.

Clark and Subic are former American military bases redeveloped as economic hubs after the Senate closed these down and banned foreign bases and troops in September 1991.

Reverted to the Philippines were over 100,000 hectares of lands, including facilities, buildings and structures left by the US military. 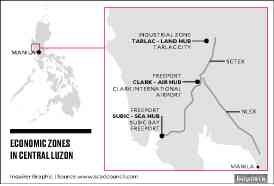 Palafox put the megalopolis proposal in context by citing the strategic position of the Philippines in the Asia-Pacific region. “Superpowers are always interested in our islands,” he said.

Among other things, the Philippines has become first in marine diversity, top in voice call centers and the leading producer of sailors and seafarers.

The economy, which was second to Japan from the 1930s to 1970s, has bounced back in recent years. Palafox did not mention the geopolitical and military significance of the country to the might of the United States and China, or the use of the former bases under the Enhanced Defense Cooperation Agreement between the Philippines and the United States.

On its own, Pampanga, the center of Central Luzon, can fit three Singapores or two Hong Kongs. The size of CRK, all of 2,375 hectares, dwarfs Naia’s 600-plus hectares. As Clark evolves into an aerotropolis, an agropolis comes out of the food-producing areas of Pampanga and adjacent provinces.

The way to go, Palafox said, was to tread the path of the world’s top 10 cities: Green, smart, livable, sustainable and disaster-resilient. “I need to integrate the sectoral plans into the main plan,” he said of among the things-to-do in the run-up to the November deadline.

In the making of a megalopolis, Palafox finds the need for visionary leadership, strong political will and good governance, recalling lost opportunities, such as Daniel Burnham’s 1905 plan for a Manila that was inspired by Paris, Venice and Bay of Naples.