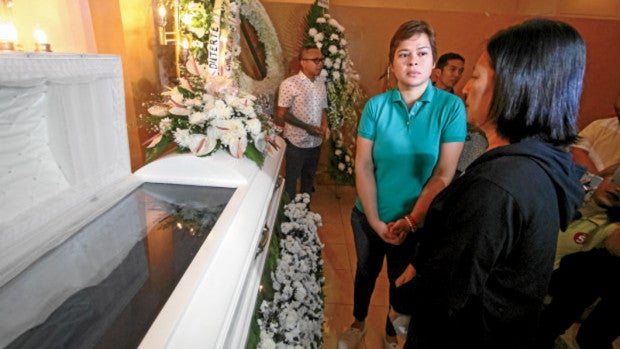 NURSE’S WAKE Mayor Sara Duterte of Davao City talks with the mother of Kristia Bisnon, her former private nurse who was among those killed in Friday’s market explosion. KARLOS MANLUPIG/INQUIRER MINDANAO

DAVAO CITY — The local government of Davao City approved on Tuesday the release of P4.5-million cash assistance for the victims of the deadly explosion.

Through an urgent motion at the Davao City Council, a P4.5-million cash will be released from the crisis intervention funds and incident expenses of the city.

The families of victims who died in the attack will receive P40,000 each while those who were wounded will be given P30,000.

“The city will also shoulder the food expenses during the wake of the 14 victims for a maximum of 10 days, and the meals of watchers of injured victims for 20 days,” the City Information Office said.

The cash assistance will be immediately delivered on Tuesday evening, according to Mayor Sara Duterte’s chief of staff, lawyer Raul Nadela Jr.

Earlier, Duterte extended to the families of the victims an initial cash assistance reportedly sourced from her own private account.

The city government is paying for the hospital expenses of the injured and the funeral expenses for the dead.  SFM/rga