Meralco power bills down in September 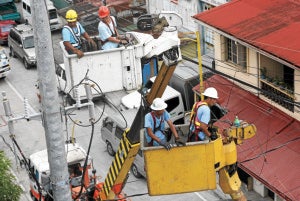 MANILA — Customers of the Manila Electric Co. can expect their power bills to go down by 4.51 centavos per kilowatt-hour in September, as the decline in transmission charges has offset the increase in the generation cost.

This means that a typical household consuming 200 kWh of electricity a month will pay P9.02 less for its power bill this month, while those consuming 300 kWh will see a reduction of P13.53. Households consuming 400 kWh and 500 kWh monthly could, meanwhile, expect their power bills to go down by P18.04 and P22.55, respectively, data from Meralco showed.

Meralco said the transmission charge component in the power bill fell by 10 centavos per kWh due to a reduction in the ancillary charges of the National Grid Corp. of the Philippines (NGCP). These charges refer to the cost of standby power supply that can be tapped in case the regular supply falls short of the requirement. Taxes and other charges also fell by a total of 4 centavos per kWh.

The decline in these charges had offset the increases in the cost of electricity sourced by Meralco from its suppliers during the supply month of August. The distribution utility disclosed that the generation charge rose by 8.79 centavos per kWh to P3.94 per kWh for this month, mainly because the cost of power from the independent power producers (IPPs) increased by 17 centavos per kWh.

The hike in IPP prices was due largely to the reduction in the operating hours of Quezon Power, which went on forced outage from August 5 to August 8; and First-Gas Sta. Rita, with Modules 10 and 20 undergoing scheduled maintenance from August 13 to August 14, and the whole August supply month, respectively. The cost of power sourced from plants under Meralco’s power supply agreements (PSAs) remained almost unchanged, dipping slightly by 2 centavos per kWh, while the electricity sourced from the Wholesale Electricity Spot Market (WESM) fell by by 32 centavos per kWh.

“However, this was more than offset by the reduction in the effective rate of line rentals and other charges,” Meralco explained.

Meralco’s distribution, supply, and metering charges, meanwhile, have remained unchanged for the last 14 months, after they registered a reduction in July 2015. Meralco has reiterated that it does not earn from the pass-through charges, such as the generation and transmission charges. Payment for the generation charge goes to the power suppliers, while payment for the transmission charge goes to the NGCP.  SFM

Read Next
Duterte: Ramos showed me list of generals, cops in drugs
EDITORS' PICK
Smart reinforces superiority with best speed and mobile video experience in PH
LTO’s P500-M deal for screws draws scrutiny
Nestlé Philippines’ ‘NESCAFÉ Plan’ bags Grand Anvil at PRSP 56th Anvil Awards
Every Filipino home can now be a smart home with realme TechLife
New 3,045 COVID-19 cases push PH total active cases to 40,074
How to lose a PH genius: Wesley So officially a US citizen
MOST READ
Robredo on Sara Duterte leading poll surveys: Why are Filipinos drawn to leadership of this kind?
How to lose a Filipino genius: Wesley So officially a US citizen
US lays out list of aid to ‘satisfy’ Duterte following VFA payment demand
Duterte order to police, military on Reds: ‘Kill them all’
Don't miss out on the latest news and information.