Makati City Hall back to normal after bomb threat 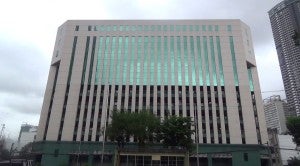 MANILA — The Makati City Hall was evacuated on Tuesday morning after a caller warned that a bomb was planted in the building.

The call was received by the switchboard operator at 9:56 a.m., according to Richie Rodriguez, head of the Makati Disaster Risk Reduction and Management Office (MDRRMO).

Mayor Abigail Binay ordered the evacuation as part of protocol and the MDRRMO conducted panelling on all floors.

City Hall operations resumed after the building was declared cleared at 11:02 a.m.

Binay earlier urged the people in Makati to stay calm but vigilant following the bombing of a night market in Davao City that killed 14 people and wounded 67.

She directed the Makati police, public safety personnel and barangay officials to take immediate steps to secure the city, while mall operators and building owners were asked to coordinate with the police in beefing up security.

“I convey to the government and people of Davao our message of solidarity in these difficult times. Our prayers go to the families of the victims, and our wishes for the speedy recovery of those who have been injured. Makati stands with Davao,” Binay said.  SFM/rga

Read Next
Poe wants probe on death of 4-year-old during drug bust
EDITORS' PICK
What to watch out for when selecting a video surveillance solution
Heads may roll at BOC, says Palace if sugar smugglers are allowed to use recycled import permits
vivo brings to the Philippines a powerful smartphone with a slimmer body, the vivo Y02s for only PHP 6,499
Palace: Biggest supermarkets in PH commit to sell sugar at P70 per kilo
DOH reports increase in daily COVID-19 deaths, mostly unvaxxed
House energy committee chair Arroyo bats for cheap electricity
MOST READ
DepEd to give teachers P5K cash allowance within first week of classes
Brian Poe-Llamanzares receives his PhD in Public Administration
LPA east of Luzon may intensify into tropical cyclone
GSIS cool to idea of lowering retirement age in PH
Don't miss out on the latest news and information.