This was the challenge Mayor Sara Duterte gave authorities as she offered a P2-million reward to anyone who could give information that would lead to the arrest of the person behind Friday night’s bombing here that left 14 people dead and at least 67 wounded.

Speaking after visiting the wake of one of the victims—her former nurse—and attending her first flag ceremony at City Hall, Duterte announced the cash reward that she said was raised over the weekend, half put up by the private sector.

The daughter of President Duterte said P1 million would be given to any individual who could provide information on the whereabouts of the perpetrator and another P1 million if the person would be delivered to authorities “handcuffed and alive.”

“I would like to emphasize that—we need him alive,” Duterte said. “We want to talk to him and find out who ordered the bombing and why it was carried out. We want to know who his cohorts are, their group, and their other terror plans.”

The mayor also announced the relief of Col. Henry Robinson Jr., Task Force Davao commander since May, and Senior Supt. Michael John Dubria, who took over as the city police director in June. No replacements have been announced.

“It’s not about their qualifications, it’s about me,” Duterte said. “I took what happened personally, there will be a strained relationship between us if they continue to stay in their posts,” said Duterte, who apologized for lapses that allowed the bombing.

In a news conference at Camp Olivas in Pampanga province on Monday, Director General Ronald dela Rosa declined to discuss action against Robinson and Dubria.

Dela Rosa confirmed that there had been a breakdown of intelligence that led to Friday’s bombing in Davao.

“I don’t want to point fingers, but maybe, to be honest about it, security might have been a bit relaxed because the city had not suffered bombings recently,” Dela Rosa said. 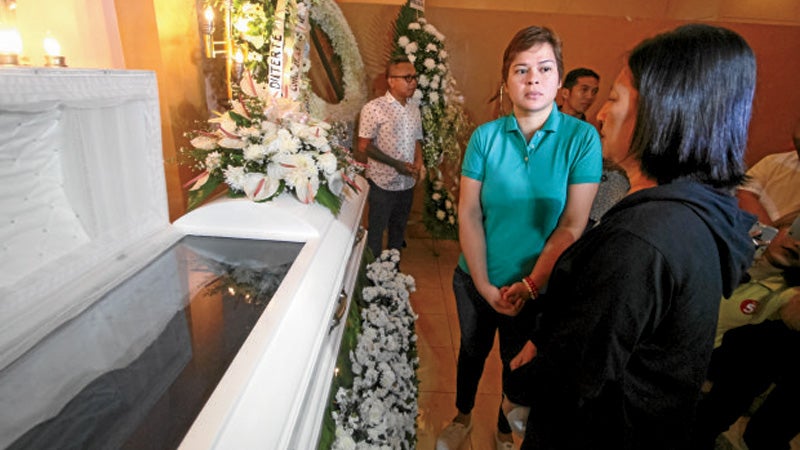 NURSE’S WAKE Mayor Sara Duterte of Davao City talks with the mother of Kristia Bisnon, her former private nurse who was among those killed in Friday’s market explosion. KARLOS MANLUPIG/INQUIRER MINDANAO

He did not give details, but he pleaded, “Please don’t blame them. Don’t malign them.”

The Philippine Army chief, Maj. Gen. Eduardo Año, told reporters that Robinson was being relieved under the principle of “command responsibility.”

Año said a list of replacements had been submitted to Mayor Duterte.

Dela Rosa said investigators were looking at four suspects: a man who allegedly put the bomb under a chair, two women and a second man who was heard asking in Bisaya, “Why did you accept the package?”

A supposed alliance between the Abu Sayyaf and drug lords was “a theory at this point,” Dela Rosa said. “There’s a possibility, but there are no strong evidence to support it.”

Asked if the police had authenticated reports posted on Facebook that four bombers had reached Metro Manila, the PNP chief said: “We are addressing this information … We are not dismissing this.”

Police authorities said the Davao blast was caused by a mortar round that was remotely detonated by a cell phone. Shrapnel have been recovered from some of the wounded.

The device was reported to be similar to those used previously in bomb attacks in Mindanao by Moro insurgents.

“We do not see Mr. Duterte and the civilians as our enemies,” he told the Inquirer by phone.

While deferring to PNP investigators, Año did not rule out the possibility that the bombing was carried out by Islamic State (IS) terrorists.

“While there is no IS in the Philippines, there are local terrorist groups all wanting to be recognized as part of the IS,” he said. With reports from Tonette Orejas, Inquirer Central Luzon, and Cynthia D. Balana in Manila