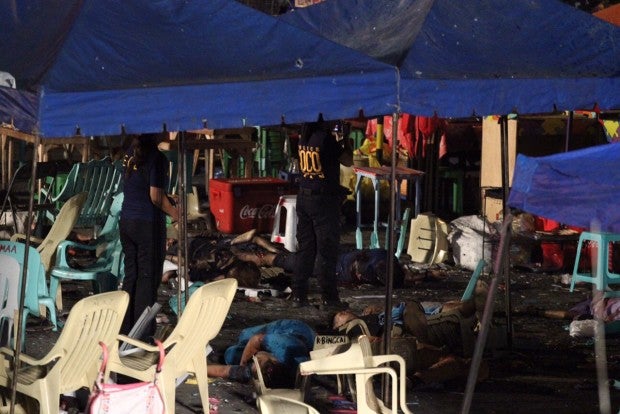 Scene of the crime operatives scour the bombed night market at Davao City for clues and evidence. Fourteen were killed and some 67 were injured when an improvised explosive device exploded late Sept. 2, 2016. (Photo by KARLOS MANLUPIG/ INQUIRER MINDANAO)

DAVAO CITY – The bomb that went off at the night market along Roxas Ave. here on Friday – which killed 14 people and wounded 67 others – was “closely similar” to the explosive that went off at the Ecoland Terminal here on Valentine’s Day 2005, Philippine National Police Director General Ronald Dela Rosa said.

“The explosive is closely similar to the signature IED of Abdul Manap Mentang,” Dela Rosa said, referring to the main suspect in the 2005 Valentine’s Day blast that killed a 12-year old boy and wounded eight other people.

As in the Valentine’s Day bomb, the one that went off at the night market here was made of mortar shell and fitted with a remote detonator, he said, citing post-blast findings.

Dela Rosa said it could even be possible that Mentang was involved in Friday night’s blast.

But in November 2015, he was re-arrested in Pigcawayan, North Cotabato for the Valentine’s Day bomb attack only to be freed later on bail when he claimed that he was not Mentang but another man, named Abdullah P. Hamsa.

In his decision granting Mentang temporary liberty for a bond of P100,000, Davao City Regional Trial Court Branch 33 Presiding Judge Lope Calio wrote in December 2015: “After assessing and evaluating the records of the case vis-a-vis the evidence presented by the movant, and considering that the prosecution has still not presented any evidence in opposition to the Urgent Omnibus Motion, the Court hereby grants the alternative prayer of the movant to post bail for his provisional liberty.”

Mentang remains at large to this day.

Dela Rosa said the police have so far “three persons of interest” in connection with the night market explosion, two of them females but would not elaborate.

The medium-built male suspect, who is in his 40s according to investigators quoting witnesses, had a massage at the massage section of the night market and hurriedly left.

Witnesses also claimed that they had called the suspect’s attention as he was leaving because he had left a backpack under the massage bed. He did not look back and continued to walk away.

A few seconds after the man left the massage section, a bomb exploded.

Dela Rosa said they have been cross-matching the description of the three persons of interest in the police’s gallery of known terrorists.

Chief Supt. Manuel Gaerlan, the Southern Mindanao police chief, said they have a total of eight witnesses now, whose testimonies could help speed up the investigation.

Both Dela Rosa and Gaerlan declined to provide further details of the investigation.

The Communist Party of the Philippines on Sunday accused the United States of having a hand in the deadly blast.

Siegfried Red of the Southern Mindanao Regional Party Committee of the CPP, said in an emailed statement that the bombing was “US-imperialist instigated.”

Red said the US has always not been comfortable with President Rodrigo Duterte’s nationalist policies.

“The bombing was carried out and masterminded by no other than the world’s greatest terrorist: the US imperialist hegemony, which is threatened by the Duterte government’s positive gestures toward the country’s anti-imperialist revolutionary forces and Duterte’s consistent pronouncements against US intervention in Philippine affairs,” the CPP regional spokesperson said.

Red said the attack was a collaboration between the US and local actors who were threatened by Duterte’s governance, war on drugs and peace initiatives.

“The heinous attack in downtown Davao City, home to GPH Pres. Rodrigo Duterte, was clearly the handiwork of peace saboteurs, ultra-rightists AFP cliques, and big druglords—all anti-Duterte forces that conspire with US imperialism to subvert the Duterte government,” Red said.

“It is hardly coincidental that initial investigations have found similarities on the explosive device used in Friday’s bombing to the explosives found in the wreck of (Central Intelligence Agency) agent Michael Mering’s hotel room in Davao City and the ones used in the Davao International Airport and the Sasa Wharf bombings in March and April 2003 respectively. So too is the fact that the bombing occurred in the hometown of the present GPH President, a city that has historically spurned US incursions for military basing or combat exercises,” the communist leader added.

The alleged claims by Islamic radicals were only meant to fuel fear to justify the proposals for more foreign military aid and intervention, Red said.

“A CIA-backed terrorist group was quick to admit its responsibility in last night’s bombing, a scripted rejoinder to sow further enmity against majority of Muslims who want just peace. US imperialism has always employed terror tactics to stir anti-Muslim sentiments and prelude its greater military intervention in countries that challenge its dominance and exploitation,” Red said.