DAVAO CITY—Police investigators fanned out on Sunday in search of three persons of interest in Friday night’s bombing of the Davao City night market that left 14 people dead and 68 wounded.

Two women and a man, described by witnesses to be in his 40s and with medium build, hurriedly left after having a massage session at the market, according to the police.

Witnesses claimed that the man left a backpack under the massage bed, and when workers tried to call his attention to his bag, he did not look back and continued to walk away. A few seconds later, the explosion took place, they said.

A police checkpoint was set up on the road between the airport and downtown, otherwise the city appeared calm. The downtown area, normally bustling on Sundays, appeared deserted.

No visible stepped-up security was in place at the airport terminal building. Residents said checkpoints had been set up along highways leading to and out of the city.

“We take it at face value, but then again we have to validate,” Dela Rosa said of the claim by a spokesperson of the bandit group that was the object of an intense military operation on Jolo following the ambush-slaying of 15 soldiers last week.

Several Army battalions have been thrown into the Jolo campaign to free at least 16 foreign and five Filipino hostages held by the Abu Sayyaf.

President Duterte, who was in Zamboanga City to condole with the families of the soldiers and visit the wounded before he flew to Davao City on Wednesday night, called off his two-day trip to Brunei beginning Sunday to meet with Cabinet and security officials. 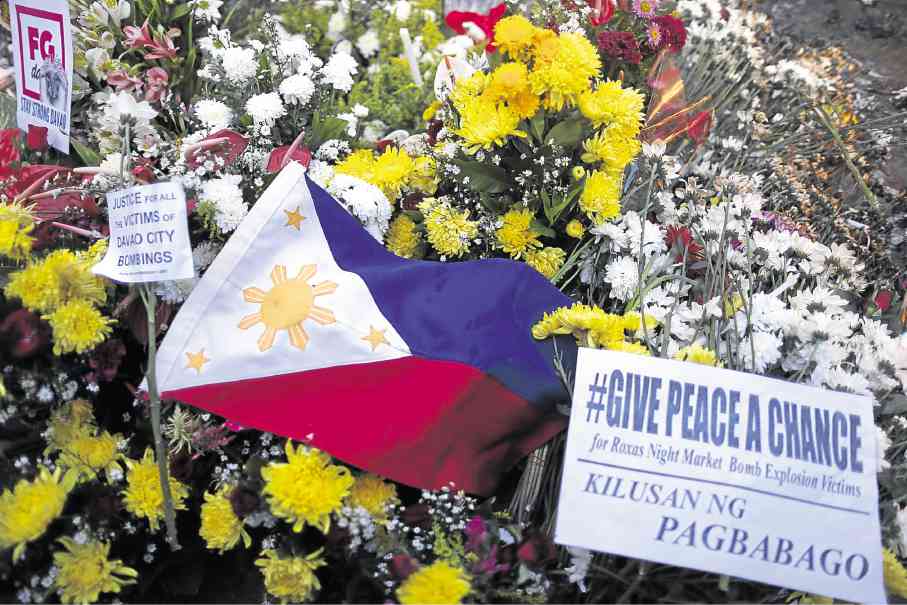 FLOWERS FOR THE DEAD Families, friends and relatives of victims of Friday’s blast at a night market in Davao City offer prayers and flowers at the scene of the bombing, which left 14 people dead and 68 others injured. President Duterte has declared a “state of lawlessness” and placed the city on lockdown following the explosion. JEOFFREY MAITEM/INQUIRER MINDANAO

According to Dela Rosa, the attack on Davao was a diversionary tactic by the Abu Sayyaf to draw the attention of security forces away from the military offensive against them in Sulu and Basilan.

Asked if he also thought the situation was drug-related, he said this had not been established, and added that the closest explanation was the campaign against the Abu Sayyaf.

Mr. Duterte on Saturday declared a “state of lawless violence” to allow the Armed Forces of the Philippines to join police forces in securing the nation against the scourge of drugs and criminality and Abu Sayyaf banditry.

Dela Rosa also said it was possible that other cities could be targeted as well. “They were able to do it here in Davao, why not in other cities?” he said.

As for the three persons of interest, the sketches of the two women and the man were being drawn by artists, he said.

Experts were also working to reconstruct the improvised explosive device that was used in the attack, presumably a mortar round, he said.

Dela Rosa called on the public to remain vigilant and be very alert in their surroundings and immediately report suspicious persons and packages they see.

“We will assure the public that if we could forgo sleep, we will not go to sleep to provide you security,” he said.

He ordered police to maximize their visibility in public places, especially with the reopening of the Roxas night market on Saturday.

Dela Rosa issued the directive to make sure police were not just sitting in patrol cars.

“They should make use of their time well. They must be aggressive and check out suspicious people, so that we would have a better chance of catching [criminals],” he said.

He sought to ease concerns that the President’s declaration of state of lawlessness could curtail human rights.

“You can tell human rights advocates, just relax. The intention of the declaration of the state of lawless violence is not designed to impinge on human rights of the people,” he said.

It is not martial law, he stressed. “It just means that the military would increase its presence to quell lawless violence that we observe happening,” he said.

Dela Rosa said the descriptions of the three persons of interest were being matched with those in the police gallery of known terrorists.

Police also found similarities between the explosive device that went off at the night market and the homemade bomb that exploded at Ecoland bus terminal in the city on Valentine’s Day in 2005, killing a 12-year-old boy. That device was made from a mortar round fitted with a remote detonator.

“The explosive is closely similar to the signature IED (improvised explosive device) of Abdul Manap Mentang,” Dela Rosa said on Saturday. It was even possible that Mentang was involved in the latest blast, he added.