DAVAO CITY — President Rodrigo Duterte wants the fight with the Abu Sayyaf to end in the bandit group’s annihilation that he is even willing to hire fearless hatchet men or mercenaries to make this happen, according to a ranking Cabinet official.

Agriculture Secretary Emmanuel Piñol said in a Facebook post on Sunday that during a meeting with security officials and some Cabinet members that started Saturday evening and ended about 4 a.m. on Sunday, Duterte was so furious at the Abu Sayyaf’s terror attacks, especially in the wake of the bomb attack here on Friday.

“If I have to hire the Gurkhas to help us fight the Abu Sayyaf, I am willing to do it,” Piñol quoted Mr. Duterte as saying during the meeting held at Enclaves in Matina, which he had also attended.

He said the President was referring to the Nepali Gurkhas, who had earned the respect of the British for being fearless during the Gorkha War of 1814-1816.

The Nepali Gurkhas were akin to the French Legion, which were close to, but were not considered mercenaries under the Geneva Convention.

Piñol said Mr. Duterte had acknowledged that the Abu Sayyaf and other extremist groups were “products of historical injustices” but their recent actions – such as the beheading of kidnap victims and bomb attacks – called for the use of force.

“There’s no other option. These people are like germs, which must be eliminated,” Piñol quoted the President as saying about the Abu Sayyaf.

“You started this. I wanted to talk to you but you leave me with no choice,” Duterte said, according to Piñol. 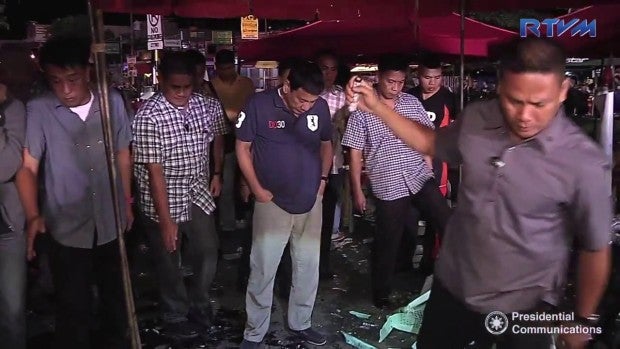 President Rodrigo Duterte stares at the ground of the Davao City night market where 14 were killed and around 60 were wounded on Sept. 2, 2016. (SCREENGRAB OF RTVM VIDEO/ Courtesy of Presidential Communications)

“The President, who was obviously hurting from the terror attack which left (14) people dead, including a young child, and over 60 others wounded, however, called on the nation to prepare for reprisals from the terror group similar to the bombing at Davao City’s Roxas (Avenue),” Piñol said.

But he said the “sacrifices to be made” would “address this problem once and for all.”

“The bombing in Davao City (on Friday evening) served as the proverbial last straw that broke the camel’s back,” Piñol said of the President’s new position.

The military has sent nearly 10,000 troops to Sulu in a bid to combat the Abu Sayyaf, which has recently killed 15 soldiers. Since August 26, the military said it has killed 30 bandits in the island-province.  SFM