Another child dies in war on drugs

GUIHULNGAN CITY—Four-year-old Althea Fhem Barbon was extra playful and sweet to her grandparents in the afternoon of Aug. 31. She asked P20 from Lorenzo Barbon, 58, and his wife, Marilyn, 58, so she could buy popcorn in a trip to this city’s Freedom Park.

Before she and her father, Pim Alrick Barbon, 31, went to the park, she hugged her grandparents tightly.

Little did Lorenzo and Marilyn know that it would be the last embrace they would get from Althea, a kindergarten pupil at Gucce Learning Center here.

Althea and Alrick died after they were shot by policemen on Larena Street in Barangay Poblacion, a few meters away from their house. Alrick, police said, was fifth on the list of drug suspects in this city in Negros Oriental province.

Althea’s death came a few days after 5-year-old Danica Mae Garcia, a resident of Dagupan City in Pangasinan province, died from a bullet intended for her grandfather.

In Danica’s case, an unidentified man barged into the eatery of her grandmother, Gemma, in front of their house on Aug. 23 and opened fire on her grandfather, Maximo, who was hit in the stomach. A stray bullet struck Danica in the head.

The Barbon family is demanding justice for the deaths of Alrick and Althea.

“We regret a lot that [a child was killed] when she was not the target,” he said. “Had we seen the child, we would not have pushed through with the operation. We would have cancelled it. We, policemen, are humans; we are not animals,” he added.

Katalbas said it was on the night of Aug. 31 when Alrick and his daughter, on board a motorcycle, went to Larena Street to meet with two undercover policemen who purportedly wanted to buy P500 worth of “shabu” (methamphetamine hydrochloride).

Since it was dark, Katalbas said the policemen did not notice that Alrick brought along his daughter. 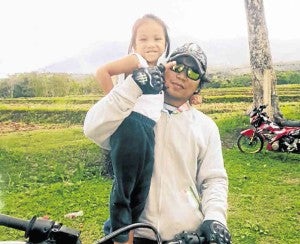 Katalbas said Alrick, when he noticed that he was dealing with lawmen, drew a gun and tried to flee, prompting policemen to shoot him.

Katalbas described Alrick as “dangerous,” noting that he once promised to give the police a fight should they arrest him.

Police reports said a .38 cal. revolver and five sachets of suspected shabu were recovered from the suspect.

But Marilyn did not believe her son would use his daughter as a “human shield.”

“A father would do everything to protect his child. The police were talking nonsense,” she said in Cebuano.

Lorenzo said if Alrick intended to use Althea as a shield, the father and daughter would not have been shot in the back.

Initial reports gathered by the Commission on Human Rights (CHR) in Negros Oriental showed Althea was seated in front of her father.

A bullet that hit Alrick in the back pierced through his chest before hitting the spinal column of his daughter.

Alrick died instantly while Althea was taken to a hospital in the capital city of Dumaguete where she died two days later.

The Barbon family did not deny that their son, a carpenter, was engaged in selling illegal drugs but said this did not justify his killing, including his daughter.

The girl’s mother, Rowena Lorica, 27, who works in Cebu, said she last saw her daughter on April 19 when she celebrated her fourth birthday.

“It is painful. I still have not accepted what happened to her,” she said.

“You would enjoy her company because she smiled all the time. People here were fond of her,” she added.

Alrick and Althea were buried at the Catholic cemetery here on Sunday afternoon.

“We want that Althea be given justice because she had nothing to do with her father’s sin, if there was any. She was innocent,” Marilyn said.

“We have faith that justice will be given to Althea and we are not going to stop until we get justice,” said Lorica.

Katalbas said the police would not intervene in the investigation conducted by the CHR, noting his office had given the agency all documents related to the case, including the autopsy report.