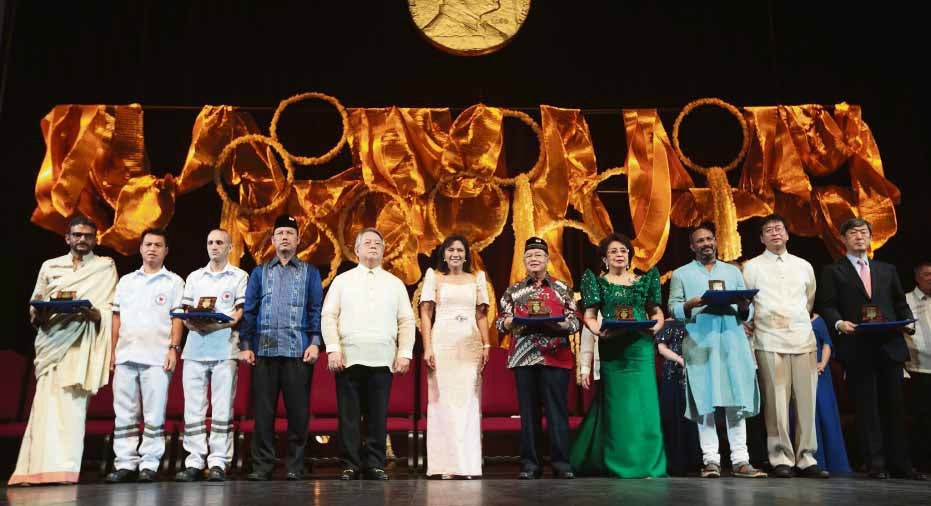 RAMON Magsaysay Awardees during awarding ceremony at the Cultural Center of the Philippines on Wednesday with Vice President Leni
Robredo as keynote speaker. GRIG C. MONTEGRANDE

OMBUDSMAN Conchita Carpio Morales was seated at a dinner party early this year with other notable names from Philippine politics and the judiciary when a hand tapped her on the shoulder.

It was then Vice President Jejomar Binay, who was at the time facing investigation by the Office of the Ombudsman on corruption allegations during his stint as Makati City mayor.

“Ma’am, I’m still alive,” she quoted Binay as saying. To which, she replied: “Sir, just doing my job.”

The brief encounter was as awkward as it was telling. But it was just another day away from the office for the 75-year-old Morales, the most feared woman in government and one of this year’s recipients of the Ramon Magsaysay Award.

“You try to be civil. You don’t take these things personally,” she said of the unexpected run-in with Binay, one of many high-ranking government officials her office has taken to the Sandiganbayan on charges of graft or other criminal deeds since 2011.

In electing Morales to receive the Magsaysay Award, widely considered as the Asian Nobel Prize, the Ramon Magsaysay Awards Foundation recognized her “moral courage and commitment to justice in taking head-on one of the most intractable problems in the Philippines, promoting by her example of incorruptibility, diligence, vision and leadership, the highest ethical standards in public service.”

Morales said the enormity of the award, which came with a $30,000 cash prize, astounded her.

All along, she said, she had thought that the pinnacle of her career came in June when her alma mater, the University of the Philippines, conferred on her an honorary doctorate for her work as the country’s top graft-buster.

“When I was reciting my speech at UP, I was on the verge of tears. Never did I imagine that a probinsyana (provincial lass) from Ilocos Norte like me would ever earn a doctorate,” the Paoay native recalled.

“I thought that was the apex,” Morales told the Inquirer. “But now there’s something that parallelizes if not exceeds the value of that award.”

Morales was born on June 19, 1941, to Lucas D. Carpio and Maria Claudio Carpio. Hers was a family of lawyers—including her father, who was a municipal judge, three of his brothers, and her cousin, Supreme Court Associate Justice Antonio Carpio.

“Whenever my father would leave a book or document in the house, he would send his clerk stenographer to look for the codigo penale or what, and always my siblings, my elder sister and younger brother, would rush to look for it. I was always the first one to find it,” Morales said, describing how she grew up around scholarly tomes.

In sixth grade, she portrayed a judge for a school play and was so immersed in the role “I thought I became one.” She eventually did years later—but not before entertaining dreams of becoming an opera singer.

As a young girl, she played marbles, climbed the Paoay Tower and memorized Shakespeare passages at her father’s prodding.  She said she wanted to become a princess and perform in front of people, especially during fiestas.

But the law profession beckoned.

Morales completed her economics degree at UP in 1964 and finished her law degree at the same university four years later. Upon graduation, she worked briefly at the Atienza Tabora and Del Rosario Law Offices, and in 1971, joined the Department of Justice, where she served for 12 years.

In late July 2011, Aquino plucked her from retirement and named her Ombudsman replacing the impeached Merceditas Gutierrez.  She became only the fifth Ombudsman since the position was created in 1988.

Under her leadership, the Ombudsman’s conviction rate rose from 33.3 percent to 74.5 percent from 2011 to 2015.  She has jailed a former president—Arroyo—and three sitting senators—Juan Ponce Enrile, Ramon Revilla Jr., Jinggoy Estrada—and several more lawmakers.

But there have been disappointments as well.

“When Enrile was released on bail [on humanitarian grounds by the Supreme Court], at that time that was the lowest point. The next lowest point was when [Arroyo] was released,” Morales admitted.

She said she was “devastated” when the plunder case against Arroyo for alleged misuse of government lottery funds was dismissed by the Supreme Court in July for weak evidence.

At President Duterte’s State of the Nation Address in July, Morales was seated in the same VIP row as Arroyo, who has resumed her congressional duties.

The two barely interacted with each other.

Known for her sharp tongue and wit, Morales acknowledged her reputation would often precede her. “[People] look at me as a fierce fellow, as masungit, mataray (acerbic). I think I’m mataray. I am impatient,” she said.

Morales confessed to a habit of googling her own name to find out what people thought about her. She would also read the comments in news articles and commentaries about her. Fortunately much of the feedback has been positive, though she would often come across “trolls” who would post the same negative things repeatedly.

“I am what I am. I am what you see,” Morales said. “But I can be forgiving… I can temper my decisions with mercy, but I’m a stickler for the law.”

She said an enemy she has forgiven was former Ombudsman Aniano Desierto, who earned her ire in 2011 when he commented to reporters she was too old and gentle to be appointed Ombudsman.

Standing up animatedly to describe how it went, she recalled confronting him at a mall and declaring: “This is the old woman you are talking about!” Then, she said, she walked out in a huff.

She ended up buying two pairs of shoes and a signature necklace to reward herself.

But time heals old wounds, and she said she had already forgiven Desierto for the affront.

She said Desierto was one of the first to congratulate her for the award: “He sent me a text: ‘My lady, congratulations for boosting the image of the Ombudsman’ or something to that effect.”

“I replied: ‘Thank you, my lord,’” she said. “Perhaps he only wanted to show his friends, ‘look the Ombudsman addresses me as my lord.’ Feeling royal.”

Quake in her boots

Unknown to many, Morales wasn’t so tough when she was a law student. She said three of her former UP law professors—former Supreme Court Associate Justices Vicente Abad Santos and Flerida Ruth Romero, and Maria Clara Campos—made her quake in her boots.

“Those people instilled fear in me. They were the terror. Of course, the kind ones didn’t inspire the same kind of fear,” she said.

Her aides, she admitted, would sometimes be at the receiving end of her legendary temper. They would ask each other: “How’s the weather?” as a euphemism for her mood for the day. “If they said ‘hurricane,’ they would be scared. No one would come into the office. I could sense their fear,” Morales said with a laugh.

But she is extremely loved by her staff.

Every day, except Sunday when she rests,  she wakes up at 5 a.m. to beat traffic and be in her office by 6:30. Her staff would come in late, but two aides would be there before her to make sure the room was fragrant by the time she walked in.

When the announcement of her win as Magsaysay laureate was made, the Ombudsman lawyers passed the hat around for a celebratory lunch. She said she pitched in and they had roasted chicken and stir-fried noodles.

All in the family

Morales is married to Eugenio Morales Jr., a retired director of the Land Transportation Franchising and Regulatory Board. They have two sons: Eugenio Morales III, an examiner at the Land Registration Authority, and the late Umberto Morales, who died of cancer in October.

Morales is related by marriage to President Duterte. Her brother Lucas Carpio Jr. and his wife, Court of Appeals Justice Agnes Reyes Carpio, are the parents of Sara Duterte’s husband, Mans Carpio.

In 2012, only a year after she was appointed to her post, a hand grenade was placed at the fence of her house as a threat, prompting her to beef up security.

“They’re trying to scare me, but I didn’t get scared. They’re the ones who are scared. They run after me but I’m faster, so I run after them,” she said.

She said she regretted not keeping the grenade when her security guards surrendered it to police.

“They should have left it with me, so I can say that’s ‘Exhibit A’ in my life,” Morales said.