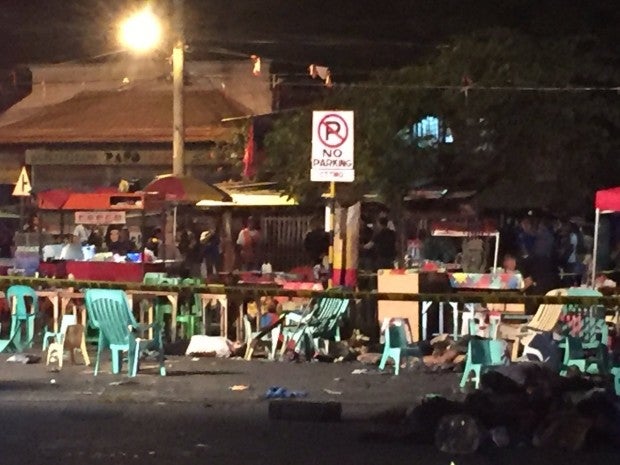 At least 10 people were killed in a powerful blast that ripped through a night market in Davao City on Friday evening. KARLOS MANLUPIG/INQUIRER MINDANAO

DAVAO CITY, Philippines— Around 14 people were killed and 67 wounded after an explosion — possibly from an improvised explosion device or IED — rocked the crowded night market on Roxas Boulevard here on Friday, local police said early Saturday.

In a radio interview, Presidential Communications Secretary Martin Andanar said based on initial information from explosives experts, a shrapnel from a mortar was found.

He added President Rodrigo Duterte presided a meeting on how to keep Davao safe.

The Inquirer saw at least two bodies sprawled on the street.

At around Friday midnight, Vice Mayor Paolo Duterte issued a statement confirming the number of dead at 10 with dozens wounded and assuring the public that “the authorities are on top of this incident.”

But he also said it was too early to determine who was behind the apparent attack. The Abu Sayyaf bandit group has recently vowed retribution against the Duterte administration for launching a major offensive against it.

Hundreds of people go to the night market which features street food, massage services and rows of ukay-ukay stalls.

The explosion happened some 100 meters away from the Ateneo de Davao University. The official AdDU Twitter account reported that the school was on lockdown. “To the students in campus, the university is on lockdown to ensure your safety. Please stay put and wait for further updates.”

The school had also converted a part of one facility into a first-aid station. “The ground floor of the Community Center is currently serving as the clinic. Students and victims may seek first aid help there.”

Meanwhile, social networking site Facebook has activated its Safety Check tool Friday, allowing Filipinos to check on their loved ones.

The tool lets Facebook users in Davao City and nearby places inform their friends and contacts of their status by marking themselves safe. With a report from Anthony Esguerra/INQUIRER.net/ JN/TVJ