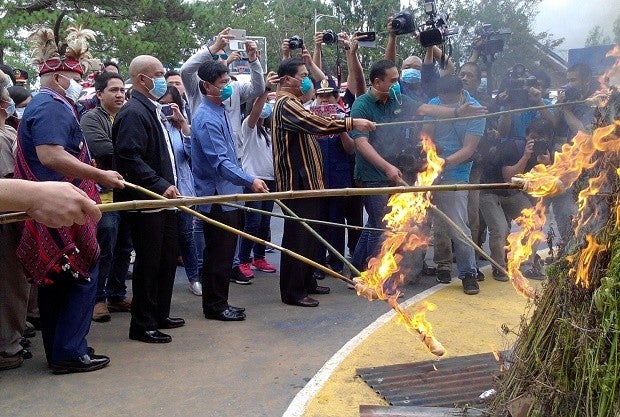 HIGH IN THE HIGHLANDS. Stacks of marijuana seized from police operations in the Cordillera mountains were torched by policemen led by Director-General Ronald dela Rosa, chief of the Philippine National Police, during his Friday visit (Sept. 2). Dela Rosa counseled the policemen to continue their crackdown against illegal drugs. KIMBERLIE QUITASOL/INQUIRER NORTHERN LUZON

CAMP DANGWA, Benguet – Stacks of marijuana were torched on Friday (Sept. 2) by police officials led by Philippine National Police Director-General Ronald dela Rosa in a visit that drew Cordillera officials from upland provinces. The marijuana strands were samples of plantations destroyed by the Cordillera police in several operations in upland forests in July.

Dela Rosa advised the police here to pursue their war on drugs, despite criticisms, “for as long as [these operations] are within the bounds of law and with respect to human rights.”

But he also said the police would be effective in the campaign against crime and illegal drugs “if we win the war within our ranks.”

“It pains us that there are police officers who are drug lords, coddlers and protectors. But we have to face reality. We need to correct their wrongdoings,” Dela Rosa said. CDG/rga