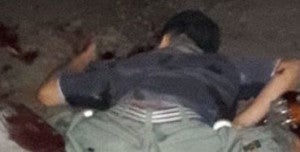 Another casualty in war on drugs. (CDN FILE PHOTO/ PHOTO FROM POLICE FILES)

He suffered seven gunshot wounds, which were inflicted by bullets coming from a .45-pistol, Ga said.

Asked what the possible motive could be for the killing of Fuentes, Ga said the police were still investigating the murder.

In Western Mindanao, at least 49 suspected drug pushers had been killed since July, according to Chief Supt. Billy Beltran, the Zamboanga peninsula police director.

Beltran said of the figure, 28 were killed in a shootout with law enforcers while 21 others were  killed by still unidentified perpetrators.

“Presently, these 21 deaths are being investigated,” he said.

Senior Supt. Luisito Magnaye, the Zamboanga City police director, said of the 49 drug-related deaths, 12 were recorded in the city.

“These are from legitimate operations, we don’t have cases of summary executions here in Zamboanga City. Those killed violently resisted,” Magnaye said.  (With a report from Julie Alipala, Inquirer Mindanao) SFM