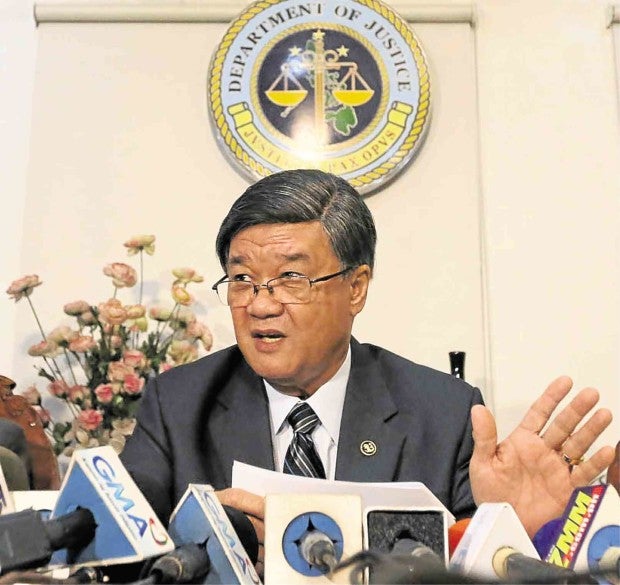 The bank account that allegedly received millions of pesos from Senator Leila de Lima when she was still Justice Secretary belonged to her former driver, Justice Secretary Vitaliano Aguirre III disclosed on Thursday, quoting a former employee of the senator.

Aguirre confirmed that an employee of the Department of Justice (DOJ), Jonathan “Jong” Caranto, had executed an affidavit against De Lima claiming that she had instructed him to deposit millions of pesos to the bank account of Ronnie Dayan.

Caranto was one of two employees who had allegedly executed affidavits against her. The other employee was named in some media reports as a certain Edna “Bogs” Obuyes.

Dayan, on the other hand, has been tagged by President Rodrigo Duterte as De Lima’s alleged bagman who had collected drug payoffs for her.

(He was allegedly given money by De Lima for him to deposit to Dayan’s account.)

The DOJ chief vehemently denied De Lima’s statement that the two employees, who worked with her when she was the Justice Secretary, were forced to execute their affidavits.

(There are affidavits, no one forced them, it was voluntary.)

READ: 6 witnesses to pin De Lima, others on drug links—Aguirre

In fact, he said, the two were willing to undergo a lie detector test to prove their allegations.

Aside from saying that there was a bank account under Dayan’s name, Aguirre could not provide other details pending further investigation.

But he assured that the money in the account would not be commensurate to the salaries of the two employees.

“Hindi maliliit lang ang sweldo nila (Their salaries are not so low),” said the DOJ chief.

Asked how the account would be linked to De Lima when it was not under her name, Aguirre said, “Hindi pa nga tapos yung investigation namin so tingnan natin kung paaano mali-link, kung mali-link ba yun sa kanya o hindi.”

(Our investigation has not ended yet so we will still see how it is linked, whether it could be linked to her or not.)

He reiterated that there are other people who would come out and speak about the alleged corruption inside the New Bilibid Prison. CDG/rga