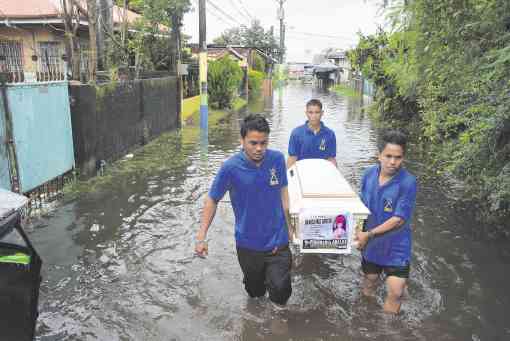 FLOODED FUNERAL Pallbearers carry the coffin of Danica Mae Garcia, 5, to the public cemetery in Dagupan City. The girl was killed when a gunman barged into an eatery and shot and wounded her grandfather who is on the police drug watch list. RAY B. ZAMBRANO/INQUIRER NORTHERN LUZON

DAGUPAN CITY—Five-year-old Danica Mae Garcia, who was felled last week by a bullet intended for her grandfather, was buried at the public cemetery here on Wednesday.

Some 150 relatives and neighbors joined the funeral procession. They waded in floodwater that rose by half a meter on a 100-meter stretch of the road from Danica’s house at Barangay Mayombo beside Pantal River, which had been swollen due to monsoon rain and high tide in the past days.

No government official showed up at the burial of the collateral damage in President Duterte’s war on illegal drugs.

An unidentified man barged into the makeshift eatery of Danica’s grandmother, Gemma, in front of their house on Aug. 23 and opened fire on her grandfather, Maximo Garcia, who was hit in the stomach. A stray bullet struck Danica in the head.

The attack took place four days after Garcia appeared at the police station to clear his name after he learned that he was on a watch list of drug users and pushers.

Gemma has denied that her husband is involved in the sale of illegal drugs.

Garcia, who is recuperating in a hospital, is unable to attend the funeral.

The event helped reunite Danica’s estranged parents, at least for a brief moment.

The child’s father, Joseph Escaño, had separated from her mother, Daisy, 29. Danica was brought up by her grandparents.

Escaño, who works as a helper in a trucking company, returned home after learning about the death of his daughter.

“Let’s not stop praying that whoever was responsible for her death will come out and [suffer] punishment,” Fr. Edgar Calunod said at a Mass for Danica at  St. Therese Church.

“Let us also pray that this will not happen again to anyone. This kind of incident should stop,” Calunod said.

At her wake on Tuesday night, Escaño stood quietly beside Danica’s coffin, gazing at her, while Gemma recounted a story by a friend of Danica that the slain child wanted to be a celebrity.

“She has become famous, all right, but she is dead,” the woman said.

But when questions arose as to who should be blamed, the police had been telling the media that their primary suspect was Bryan Macaayao, reportedly a shabu (methamphetamine hydrochloride) pusher in the neighborhood who was identified by a witness as the one who fired at the Garcia house.

Informed about the identity of the suspect, Gemma said the news only made the family more fearful. “What if [he] comes back for us? We do not want to live here anymore,” she said.