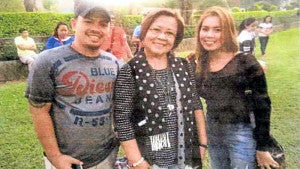 ALBUERA, Leyte — One of underlings of suspected drug lord Kerwin Espinosa surrendered to the police past2 p.m. on Wednesday, less than 24 hours after Kerwin’s father, Mayor Rolando Espinosa Sr., asked them to give themselves up.

Tonypet Zaldivar, a scion of a prominent family here, went to the Albuera Municipal Police Station and turned over a 9mm pistol, which he claimed was given by Kerwin for protection.

Zaldivar cried as he told Chief Insp. Jovie Espenido, Albuera Municipal Police chief, how scared he was when Espinosa named him as among the cohorts of his son, Kerwin, said to be the biggest drug lord in Eastern Visayas.

He then asked a sibling to accompany him to the police station.

Zaldivar told police investigators here that he had been selling the illegal drugs for more than two years.

He said his first supplier was Monasimban Limbona who was killed by Police Chief Espenido in 2015 during a hot pursuit operation following a raid on his house  in Barangay Tambulilid, Albuera.

With Limbona’s death, Zaldivar said he turned to Kerwin for his supply of drugs.

But he claimed that he had stopped after he surrendered to Mayor Espinosa during an Oplan Tokhang campaign on July 6.  Oplan Tokhang is the Philippine National Police’s house-to-house campaign in which cops visit known drug pushers and users at their homes to convince them to surrender and undergo rehabilitation.

Zaldivar said he used to collect at least P90,000 per day from his illegal drugs trade. His customers were from different towns in Leyte.

Of the amount, P75,000 went to Kerwin. The rest of the money was splurged on gambling.

As of 5:28 p.m., the interrogation of Zaldivar was still ongoing.  SFM