‘We beheaded your son’ 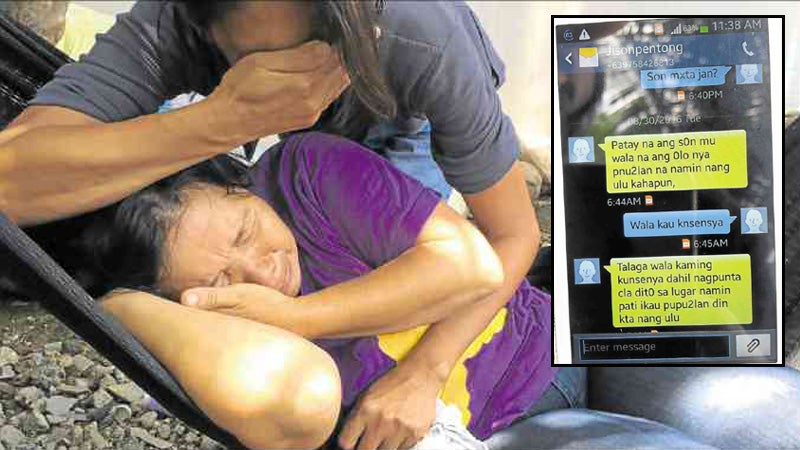 MOTHER LOSES SON Mila Falcasantos weeps over the loss of her son, Pfc. Jison Falcasantos, who was among the 15 Army soldiers killed by Abu Sayyaf bandits in an ambush in Patikul, Sulu province, on Monday. She had received replies to her text messages (right photo) from her killers informing her about her son’s beheading. JULIE ALIPALA-INOT/INQUIRER MINDANAO

ZAMBOANGA CITY – When the news broke out on Monday afternoon that 15 soldiers had been killed in Jolo’s forested Patikul municipality, Mila Falcasantos sent a text message to her son Jison, a private first class in the Army’s 35th Infantry Battalion.

The mother of seven, who is in her mid-60s, anxiously waited for an answer, but it did not come. She became deeply worried of her third child and barely slept that night.

“Patay na ang son mu, wala na ang ulo niya, pinutulan na namin ng ulo kahapon (Your son is dead, he has no head now, we cut off his head on Tuesday),” said the message from the son’s number.

Stunned, Falcasantos texted back: “Wala kayong konsensya (You have no conscience).”

The reply came back: “Talaga wala kaming konsensya dahil nagpunta sila dito sa lugar namin pati ikaw puputulan din kita ng ulo (Indeed, we don’t have qualms because they were the ones who came to our area. I will cut off your head, too).”

The woman telephoned a relative, a military officer in Jolo, who confirmed that Pfc. Jison Falcasantos was one of the 15 soldiers killed at Sitio Kan Jalul in Patikul on Monday afternoon and that her son had been beheaded.

“He saw my son’s body, and two other soldiers, including an officer, had also been beheaded,” the mother told the Inquirer.

She said President Duterte must end the Abu Sayyaf menace so that no more lives would be wasted.

She admitted that she knew the risks soldiers faced but the beheading of her son was unexpected. “I did not raise him so he would end that way,” she said.

The Army mounted an offensive in Patikul last week against the Abu Sayyaf after the bandits ignored pleas by the President to release hostages the group had kidnapped for ransom.

At least 16 foreign hostages and five Filipinos are held captive by the Abu Sayyaf.

By Tuesday, the Army had lost 15 dead, according to Maj. Filemon Tan Jr., spokesperson of the Western Mindanao Command.

At least 21 Abu Sayyaf men were reported killed in the clashes.

Tan denied reports that soldiers had been decapitated by the bandits. “There is no truth to the beheading of our soldiers,” he told the Inquirer via text message.

Ten other soldiers were wounded in clashes that involved some 70 Abu Sayyaf bandits under Radulan Sahiron.

Col. Edgard Arevalo, chief of the Armed Forces of the Philippines public affairs office, said 21 bandits had been killed and scores had been wounded, including a deputy leader identified as Jamiri Jawong Jauhari, in Army-initiated encounters four days ago.

“As we gaze at the national flag that flies at half-staff anew, soldiers knew that one too many hero among them has again offered his life—that others may live,” Gen. Ricardo Visaya, AFP chief of staff, said in a statement issued at headquarters.

Visaya said the military was determined to “rid our country of the menace this Abu Sayyaf brings to the world” but he acknowledged that “there may still be casualties along the way.”

Read: WHAT WENT BEFORE

“We have all the time. Keep the pressure on the enemy until they wear out. Just ensure they won’t be able to leave the island and we will be triumphant in the end,” Visaya said.

“It is unfortunate that a number of our troops have already lost their lives,” said the President’s spokesperson, Ernesto Abella.

“However, as Defense Secretary Delfin Lorenzana said on Aug. 29, we are going full force and [on] all-out operation against them,” Abella said in a press briefing at Malacañang.

He said five battalions, or some 2,500 troops, would be sent to Sulu province to go after the bandit group that had been tagged as responsible for kidnappings and beheadings.

The President, he said, is focused on ensuring that the threat posed by the Abu Sayyaf is “terminated as soon as possible.”

As for the timeline for getting rid of the bandit group, Abella said it should be done within a “reasonable period.”

“In other words, it should not be an extended engagement,” he added.

Speaking in Malacañang on Monday night, the President said he knew there would be some reprisals, but added that he was ready for that. With a report from Leila B. Salaverria and Cynthia D. Balana in Manila