Gadhafi is gone but other US foes remain | Inquirer News

Gadhafi is gone but other US foes remain 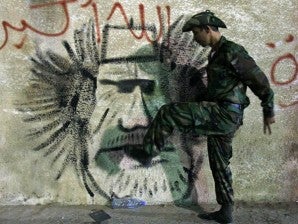 MORE DESPOTS TO GO. In this photo taken Thursday, Oct. 20, 2011, a Libyan former rebel fighter kicks a graffiti depicting Moammar Gadhafi with the words in Arabic reading, "God is Great", on the Libyan-Tunisian border checkpoint of Ras Ajdir. The death Thursday of Gadhafi, two months after he was driven from power and into hiding, decisively buries the nearly 42-year regime that had turned the oil-rich country into an international pariah and his own personal fiefdom. (AP Photo/Francois Mori)

WASHINGTON— Moammar Gadhafi now joins the ranks of dictators, autocrats and other powerful foreign leaders who have battled the United States only to come to a bad end.

But after the demise of Libya’s “Brother Leader,” plus Osama bin Laden, Iraq’s Saddam Hussein and Serbia’s Slobodan Milosevic, there is no shortage of other influential heads of state around the world determined to criticize and challenge the U.S., notably in Cuba, Venezuela, North Korea and Iran.

These leaders have accused the United States of abusing its status as the world’s sole surviving superpower and de-facto leader of the West, playing to doubts about U.S. intentions to help cement their authority at home and enhance their prestige abroad.

These themes tap a deep vein abroad and likely will continue to resonate.

Despite the threats to centralized power from opening borders, expanded trade and a wired world, it’s doubtful that the age of the dictator and the despot will end soon.

Among the leaders who likely to remain a thorn in the side of the U.S. are:

—Fidel Castro, who survived CIA assassination plots, the Bay of Pigs invasion and the U.S. economic embargo to excoriate and antagonize the United States from Cuba for more than half a century. Castro, 85, formally resigned as president in February 2008 due to illness but handed the reins to his brother, Raul, and the revolutionary regime survives. Cuban-U.S. trade is minimal and there are no diplomatic relations between the two countries. The U.S. accuses the Cuban government of trampling on human rights and silencing dissent, while Havana portrays itself as a victim of U.S. bullying.

—Venezuelan President Hugo Chavez, a popular left-wing activist and former military officer elected in 1998 who instituted radical changes in economic and social policy, including expanding state control of the oil industry. Chavez has accused Washington of plotting to invade Venezuela, called for containment of the U.S., aligned himself with Cuba and signed major arms deals with Russia to build Venezuela into a regional power. The U.S. likes to portray Venezuela as more of an irritant than an adversary, but that could change if Chavez hangs onto power and adopts more aggressive policies.

— Kim Jong Il of North Korea, a Stanlinist-style nation with a 1 million-strong army that has been a thorn in the side of the U.S. since the Korean War. In recent years the U.S. has sought to persuade Kim to give up his small nuclear weapons program, offering economic aid and diplomatic favors as bargaining chips. But the U.S. accuses Kim of repeatedly reneging on promises to disarm while selling weapons expertise abroad. The U.S. and other nations accused Pyongyang last year of torpedoing a South Korean navy ship and shelling a South Korean island. With the North Korean leader believed to be gravely ill, the key to Washington’s future relations with Pyongyang may be Kim’s son and heir apparent, Kim Jong Un.

—Iran clerical leadership. The theocratic regime in Tehran has demonstrated little tolerance for dissent and a deep and abiding hostility to Washington since the overthrow of the U.S.-backed regime of the shah of Iran in 1979. President Mahmoud Ahmadinejad’s broadsides against the U.S. and Israel are a regular feature of U.N. General Assembly meetings, but his is just one voice among many in the Iranian government, which Western analysts say consists of a jigsaw puzzle of anti-Western factions. The present conflict with Washington grows out of concerns about Iran’s support for terror groups in the Middle East and attacks against U.S. troops in Iraq and Afghanistan, but mainly focuses on Tehran’s nuclear ambitions. The U.S. says Iran is laying the groundwork for a nuclear weapons program that could threaten the Middle East, U.S. and Europe. Iran says it is interested only in peaceful nuclear technology.

Not all of the world’s strongmen are regarded as enemies of the U.S.; during the Cold War and beyond, many were treated as stalwart allies. Even today, the U.S. occasionally criticizes President Aleksander Lukashenko of Belarus, Robert Mugabe of Zimbabwe, and Islam Karimov of Uzbekistan, but it maintains diplomatic relations.

Prime Minister Vladimir Putin, who has dominated Russian politics for more than a decade, has been sharply critical of the U.S. in the past, accusing Washington of dictating to others in its conduct of foreign policy. Despite continuing differences over missile defense and Middle East policies, though, the Obama administration has worked hard to improve ties and the U.S. and Russia are working together on issues of mutual interest.

The U.S. also faces the challenge of helping prevent newly liberated countries from retreating from democracy. While Taliban leader Mullah Omar was driven from power in Afghanistan in 2001, his movement made an impressive comeback and could once again become a major force in Afghanistan politics as the U.S. withdraws.

From the U.S. perspective, the survival of openly hostile regimes may be less important than the rise of rival economic and political powerhouses like China, India, Brazil and Russia, a trend that some experts say could one day create a world where the United States becomes one major power among many competing for influence and markets.

One of those countries could be Libya.

Gadhafi’s death Thursday is just the beginning of a critical new phase in Libya’s history, said Anthony Cordesman of the Center for Strategic and International Studies in Washington. The leaders of the Libyan rebellion inherit a divided population, a ruined economy and a barely functioning state — all crippled by decades of Gadhafi’s erratic rule.

“He left Libya with a unique set of problems,” Cordesman said. “You’d have to go back to Nero or Caligula to find someone who was able to impose their own personal eccentricities on a state to the degree that Gadhafi did.”