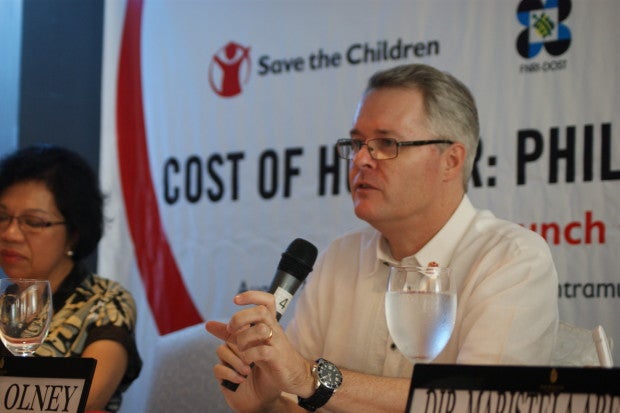 The Philippine economy is wasting P328 billion a year due to the woeful effects of childhood stunting on workforce and education, research findings from an international group revealed.

The study entitled “Cost of Hunger: Philippines,” which was released by Save the Children on Tuesday, divulged that the Philippines loses nearly 3 percent of its gross domestic product due to childhood stunting, a common form of malnutrition, and a paucity of government programs aimed at solving it.

The 328 billion worth of economic loss consists of:

Ned Olney, Save the Children Philippines country director, cited that malnutrition among children produces lower human capital and meager economic production. “This study proves that undernutrition has a cost to all of us. In just a year, Philippines has lost almost 3 percent of its GDP in terms of education and productivity costs due to stunting. If we add up health costs, the likely impact would be an additional 0.05-1.6 percent,” he said.

Between 2013 and 2015, Save the Children revealed that childhood stunting rapidly plummeted from 10 percent to 33 percent, which coincides with the rise of poverty rates and decreasing immunization rates.

The report also highlighted the government’s minuscule investment in nutrition and feeding programs. The Philippine government designates only 0.52 percent of the budget for anti-malnutrition initiatives, significantly lower than the global average allocation of 2.1 percent.

Filipino children who suffered from starvation during the first two years of life are more likely to repeat grade levels, quit school, and end up in low-paying jobs. Olney said, “Any investment in reducing childhood undernutrition will reduce suffering and poverty, and will ultimately stimulate economic growth for all Filipinos.”

The international NGO advocated for the government to stimulate feeding programs for the first 1,000 days of impoverished children including the mother’s pregnancy up to the baby’s second birthday, which is believed to a crucial period to fend off childhood stunting.

“Brain development starts at 0-2 [years] the first 1,000 days. Now, if the child is not fully supported in their first 1,000 days, you would expect that when they go to kindergarten, even with social preparations…If they are stunted at 5 [years old], there is nothing more we can do,” said Dr. Ella Cecilia Naliponguit, Director III of the Health and Nutrition Center of the Department of Education.

On the other hand, Department of Social Welfare and Development Assistant Secretary Malou Tugade said that “malnutrition will not have a substantial decrease unless we address the roots of the situation, which is the roots of poverty.”

Lastly, the NGO called on the public to support the “First 1,000 Days Bill” recently filed at the House of Representatives, which envisages to push for substantial nutrition policies, strengthen the Milk Code (Executive Order no. 51) and the Breastfeeding Promotion Act (Republic Act no. 10028), and reform conditionalities of the Pantawid Pamilyang Pilipino Program.

“Nutrition is the cornerstone of all development efforts. This new report tells us that for every US$1 spent on programs to avert stunting in children below 2 years old, the Philippines could save over 100 US dollars in health, education, and lost productivity costs,” Olney noted. RAM/rga 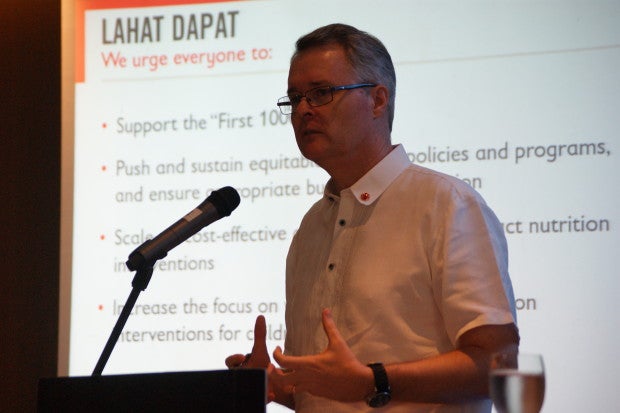 Ned Olney, Save the Children Philippines Country Director, spoke about the economic losses due to malnutrition. PHOTO by Gianna Francesca Catolico/INQUIRER.net 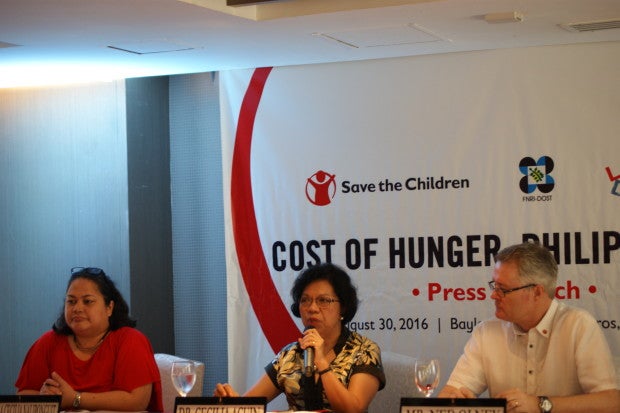 The panel articulated their reactions to the report. PHOTO by Gianna Francesca Catolico/INQUIRER.net 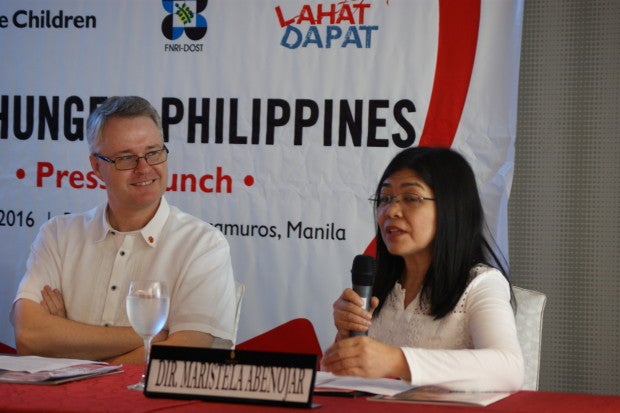