Drug gang head nabbed in Taytay on tip from suspects 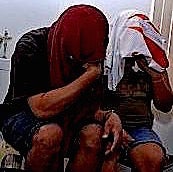 MANILA — The alleged leader and three members of a drug trafficking group, which has been distributing shabu (methamphetamine hydrochloride) in Rizal, Pasig and Marikina, have been arrested by members of the Eastern Police District, in Taytay, Rizal, police said.

Macatlang said 13 sachets of shabu were seized from the suspects.

Also recovered were various drug paraphernalia and three units of motorcycles, the ownership and registration papers of which were still being verified as of Monday. Confiscated from Exsano was an unlicensed .38 revolver, and from Dionisio a 9mm pistol, police said.

Police are still verifying if the suspects, now detained at the CIDG office at the EPD headquarters in Pasig City, have previous cases.

The suspects told the police they were selling illegal drugs to buy rice and food, Macatlang said.

The four are facing charges for violations of sections 5, 11, and 12 of Republic Act 9165, the law against drug pushing and drug trafficking, and Republic 10591 or the Comprehensive Firearms and Ammunition Regulation Act, at the Rizal Prosecutor’s Office.

Macatlang said the four were arrested based on a tip-off from the group’s three other members who were arrested in separate buy-bust operations last Saturday in Barangay Pinagbuhatan, Pasig City.

Among the arrested were Rose Ann Ronquillo and Mylene Babista who both voluntarily surrendered to Pasig City Police’s Tokhang program last July 15 and had been joining rehabilitation sessions.

“They surrendered already, but it’s never a guarantee they will stop the illegal drug trade. Some surrender for safety and convenience purposes,” Macantal added.

Eight plastic sachets of shabu were seized from Ronquillo and Babista.

The amount of shabu seized from Exsano’s group and from Ronquillo and Babista had a total street value of P60,000 to P70,000, police said.

An investigation is still ongoing.  SFM/rga