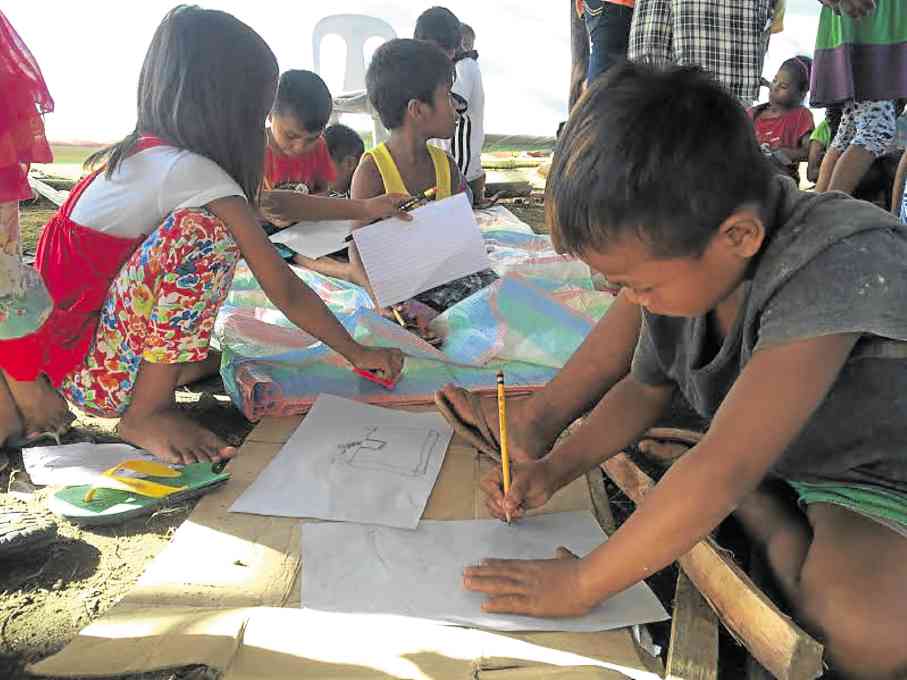 “LUMAD” children continue attending school in makeshift tents at the sports complex in Tandag City in Surigao del Sur province, where their families have been staying since leaving their communities in Lianga town last year. NICO ALCONABA / Inquirer Mindanao

SAN FRANCISCO, Agusan del Sur—When more than 3,000 Manobo evacuees start their four-hour, 110-kilometer trek back to their upland homes in Lianga, Surigao del Sur province, on Friday, they expect no less than President Duterte to supervise their return from Tandag City.

“The President himself had assured us during our meeting that he will personally supervise the safe return of the ‘lumad’ (indigenous) back to their communities,” said Bishop Modesto Villasanta of the United Church of Christ in the Philippines, a convener of the Friends of the Lumad in Caraga.

Mr. Duterte made his commitment to be in Tandag on that day during a meeting in Malacañang on Aug. 15, Villasanta said.

The scheduled homecoming will happen exactly a year and a day after the lumad people were forced to leave their communities when members of the paramilitary group Magahat-Bagani killed three of their leaders in the village of Diatagon in Lianga.

The militiamen shot and killed administrator Emerito Samarca of the Alternative Learning Center for Agricultural and Livelihood Development (Alcadev), Dionel Campos and Juvello Sinzo in Diatogon’s Sitio Han-ayan. Almost a year later, no suspect has been arrested even as the government put up a P3.6-million bounty on militia leaders Bobby and Loloy Tejero and Margarito Layno.

Army soldiers have set up camp in Han-ayan and are only awaiting word from the Manobo people about their confirmed date of return before their pullout, said Col. Isidro Purisima, commanding officer of the 75th Infantry Battalion.

Purisima said details of the turnover would be threshed out during a meeting today between military and lumad representatives, including Villasanta.

“Even before, we are ready to assist them. This is our mandate to protect the civilians from any harm,” he said.

He denied claims from Malahutayong Pakigbisog sa mga Sumusunod (Persevering Struggle for the Next Generation) or Mapasu, an indigenous peoples organization, that his men had ransacked houses and damaged the facilities of Alcadev. The military has branded Mapasu a communist front.

“There is no truth to it. In fact, we guarded Han-ayan from anybody who will infiltrate the community while the residents were away,” Purisima said.

In a statement, Mapasu said it had sent a group to the site on Aug. 24 and was “enraged upon seeing the large military camps in our communities at Kilometer 9 and Han-ayan.” The inspection in 11 communities was initiated by the provincial government.

“Our hearts were crushed upon seeing our houses damaged, our once productive farms covered with weeds and our schools rendered unusable,” it said.

The group’s strong opposition to the entry of logging and mining companies in Lianga may have drawn the ire of the Magahat-Bagani, which is led by Datu Calpet Egua.