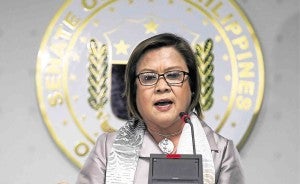 MANILA — Resigning would mean admitting to something she did not do.

Sen. Leila de Lima had this response Monday to President Duterte’s call for her to resign from the Senate, as she asserted that she had done nothing wrong and that the chief executive had already prejudged her.

She also reiterated her decision not to attend the House of Representatives inquiry into the proliferation of drugs at the New Bilibid Prisons (NBP) during her time as justice secretary or head of the Department of Justice. Last Sunday, she called the House investigation as the President’s “kangaroo
court” and an “inquisition straight from the dark ages.”

“On the call for resignation, you know, I’ve told you, that has also crossed my mind so they would be quiet, so they would leave me alone, and so that my life will be peaceful… that I just resign,” De Lima said.

“But after much reflection, I repeat: Resignation at this point will be an admission of guilt and a sign of weakness. And I’m neither weak nor guilty,” she added.

Speaking at a hospital visit in Tacloban City earlier Monday, Mr. Duterte had said De Lima should resign, and that “I will hang myself” if he were the Senator.

It was the latest in a string of tirades the President had launched against the junior lawmaker just as she began her Senate inquiry into the spate of deaths amid the administration’s bloody war on drugs.

De Lima said the President had already judged her as guilty, expressing doubts on the fairness of his staunch ally, House Speaker Pantaleon Alvarez, who will lead the congressional inquiry.

Alvarez called on her Sunday to participate in the House inquiry, saying her public denials would not suffice.

“That will be difficult. I know that I have nothing to do with that. And I’m judged guilty already by the President. And then you think that House Speaker will be anything near fair to me?,” De Lima said in an interview at the Senate.

“I’m already judged guilty, I’m finished in so far as the President is concerned kaya that’s why he’s asking me to resign. And then I go and face [the House inquiry]? Wala na kong kahihiyan sa sarili ko nun ah,” she added.

She refused to make fresh comments on her inclusion in a “matrix” of personalities involved the NBP drug trade, which the President had released.

“I am tired of repeatedly denying that. But that’s all I can do because that’s what is true. I have nothing to do with that, that’s the truth. I don’t want keep talking about that,” she said.  SFM