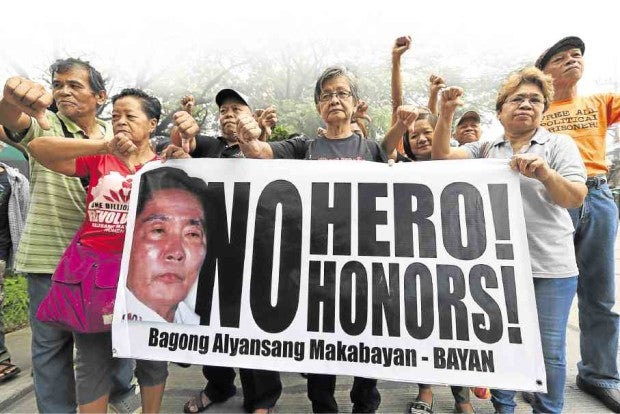 The skeletons literally kept immortal the mother-and-child bond through decades. They were discovered by relatives in 2008, 37 years after the Manili massacre in Carmen, North Cotabato, in 1971.

This is one of the many scenes that Moro officials want the new generation of Muslim Filipinos to recall as they oppose the burial of the late dictator Ferdinand Marcos at Libingan ng mga Bayani (Heroes Cemetery).

Lanao Sur Assemblyman Ziaur-Rahman Alonto Adiong said Marcos should not be buried at Libingan, much less given a hero’s burial.

Adiong said he had authored a resolution urging his peers at the Regional Assembly of the Autonomous Region in Muslim Mindanao (ARMM) to take a second look at the issue by “revisiting the atrocities of the Marcos regime, anywhere from the 1971 Manili massacre in Carmen, North Cotabato, to the 1982 Pata Island massacre in Sulu.”

FEATURED STORIES
NEWSINFO
Proposed toll for newly opened Skyway 3 ranges from P110 to P274
NEWSINFO
Duterte to firms: No franchise until you settle your accounts with gov’t
NEWSINFO
‘Hotbed of recruitment’: Lacson backs termination of UP-DND accord

Adiong said officials should visit those places to be reminded of how the Bangsamoro fiercely fought martial law in the 1970s.

ARMM officials are known to have often toed the line of Malacañang in most national issues. But, this time, Moro officials seek to muster support for a stand against Marcos’ burial at Libingan.

Like Adiong, ARMM Gov. Mujiv Hataman is too young to remember how martial law sowed fear in his native Basilan.

Hataman said he and his siblings, now Basilan Gov. Jim Salliman Hataman and Sumisip town Mayor Gulam Hataman, had been at the forefront of anti-Marcos rallies in their college years.

Hataman said in 2011 he had pushed for the Reparation Law in Congress to get the Marcoses to compensate victims of martial law, after this was requested by the Moro Islamic Liberation Front.

Maguindanao Assemblyman Khadafe Mangudadatu agreed with Adiong, adding that those involved should revisit not only the rules, but the agreement between the Marcoses and the government, bearing the commitment to compensate, or comply with the Reparation Law for victims of martial law.

Two other Moro officials said they were “not ready to forgive” after what they had gone through as martial law prisoners.

Ismael Maulana, ARMM Reconciliation and Unification commissioner, and Dong Anayatin, who were both martial law detainees, said the issue of Marcos’ burial should at least be submitted to a national plebiscite.

Anayatin and Maulana recalled they were arrested without warrants and were detained on fabricated charges. They organized the so-called “Operation June Bride,” a plot to allegedly assassinate then Defense Minister Juan Ponce Enrile.

Adiong said even his own family suffered from political harassment by Marcos against the political opposition at the time, including his grandfather, the late Sen. Ahmad Domocao Alonto.

According to one study, progovernment militias were behind 21 cases of massacre from 1970 to 1971, which left 518 people dead, 184 injured and 243 houses burned down (“The Liberation Movements in Mindanao: Root Causes and Prospects for Peace,” a doctoral dissertation by Marjanie Salic Macasalong).

One report says 3,000 Taosug civilians, including women and children, were killed in months of Philippine military artillery shelling on Pata Island, Sulu. Accounts say the operation had been launched after the Army suffered one of its biggest defeats in the hands of Moro rebels on Feb. 9, 1981.

The 1982 shelling on Pata has been tagged as a massacre.

In the Manili massacre, 70 to 75 Maguindanaons, including women and children, were killed inside a mosque in Carmen, North Cotabato, on June 19, 1971. It was also in this massacre that a woman was found as she lay dead with her newborn still feeding on her breast.