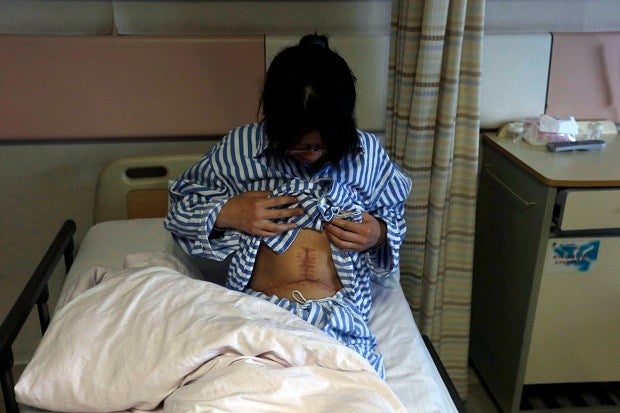 In this Wednesday, May 15, 2013 file photo, 28 year old Fang Hui shows off the scar from a living donor organ transplant operation where she received a portion of her sister’s liver, at a hospital in Hangzhou in eastern China’s Zhejiang province. China claims it ended the harvesting of executed inmates’ organs for transplants in January 2015. Some foreign doctors who have worked in China say authorities are behaving more responsibly, but other observers say China hasn’t done enough to prove that it’s fulfilled that pledge. AP FILE PHOTO

BEIJING — A Canadian patient’s receipt of a kidney transplant after waiting just three days during a recent visit to China raised an immediate red flag among surgeons at the Montreal-based Transplantation Society: A turnaround that quick indicates the organ likely came from the body of an executed prisoner.

The case adds to doubts among many doctors internationally about whether China has met its pledge to stop harvesting the organs of executed inmates. The practice is widely condemned by the World Health Organization and others because of concerns over coercive practices and fears it could encourage executions.

China officially claims it ended the harvesting of executed inmates’ organs in January 2015. Some foreign doctors who have worked in China say authorities are behaving more responsibly, but other observers say China hasn’t done enough to prove that it’s fulfilled that pledge.

China sought to use the Transplantation Society’s decision to hold its annual meeting in Hong Kong this month as validation of its transplant program. But Dr. Philip O’Connell, the society’s president, rejected that interpretation, even if it appeared some reforms had been successful.

“We realize that this isn’t going to change in a day,” O’Connell said. “It’s not going to go from a system that was using organs from executed prisoners, that was driven by corruption and where organs were being paid for … to a system that’s completely open, transparent and ethical.”

In a country that routinely suppresses discussions of human-rights issues and cracks down on lawyers and independent groups, government officials and state media have been relatively open about China’s problems with organ donation.

Dr. Huang Jiefu, head of the system that supervises transplants in Chinese hospitals, has been the public face of the country’s attempts to change its transplant practices. Huang publicly admitted in 2005 that doctors used executed prisoners’ organs. In 2011, Huang and other officials estimated that 65 percent of transplanted organs from the deceased came from executed prisoners.

In an interview Friday with The Associated Press, Huang said he was confident hospitals under his purview were moving to donated organs, but that black-market surgeries still persist.

“We still have a long way to go,” Huang said.

A former deputy health minister, Huang said he speaks to top government officials about reforms they need to make to win the world’s confidence. Among the needed reforms, Huang said, is a crackdown on organ trafficking and more regulations on how organs are procured. China also needs to train far more doctors and hospitals to perform surgeries, he said.

“Our organ transplantation must be 100 percent reliant on civilian, voluntary organ donation,” Huang said. “Otherwise, we cannot stand on the world stage.”

China is believed to execute more people than any other country in the world, though the total number is kept secret. Amnesty International estimates the annual number is in thousands.

A donor registry was piloted in 2010 and has been expanded into a national system. Newspapers in China often publish positive stories of families that have given the organs of a loved one, an apparent attempt to shift longstanding cultural attitudes about donation.

One such story published by the Shanghai Daily newspaper earlier this month detailed the “selfless” donation of a 34-year-old doctor’s organs to help six people. In what appeared to be a reference to traditional beliefs about keeping a body whole, the article quoted the doctor’s wife as warning their daughter against “tying her hopes to an uncertain heavenly place.”

According to the government, Chinese doctors performed 10,057 organ transplants in 2015. Health officials have also said they expect to increase the number of hospitals that can perform transplants. By its own estimates, China has about 300,000 patients a year in need of organs, a challenge that will only get bigger as the world’s largest population ages. Its national rate of donors leads Japan and most other Asian countries, but is far behind the United States and most nations in Western Europe.

Chinese government statistics often engender deep skepticism, and critics of China’s organ donation practices say they’re not convinced. Some critics, citing China’s history and the prevalence of black-market surgeries, contend the true number of transplants is much higher than the official numbers, and that executed prisoners remain the source for many of those organs.

Dr. Torsten Trey, executive director of the advocacy group Doctors Against Forced Organ Harvesting, said international visitors were not seeing enough of the system to truly judge the accuracy of China’s statistics or claims of progress.

“The change was not successful, because there is no change,” Trey said in an email.

For more than a decade, doctors from outside China have worked with Huang and other officials. Huang said he has invited transplant surgeons to tour hospitals and meet doctors.

Dr. Michael Millis, a transplant surgeon at the University of Chicago, said he’s visited “several dozen” transplant centers in China as part of his volunteer work in the country. One sign of a shift, Millis said, was that doctors at those centers used to have routinely scheduled surgeries. Now, they talk of having multiple surgeries in one day or days without any surgeries at all. That indicates they are operating on the up-and-down schedule of a system fueled by voluntary donations rather than executions, Millis said.

“These are the stories that I can say that my personal experience is changing and it’s changing to the system that the rest of the world sees,” Millis said.

Millis says reports like the recent case in Canada suggest black-market surgeries still occur in China, though not at the scale alleged by others.

“There is no evidence it is an extensive black-market parallel system that would generate a large number of organs from executed prisoners,” Millis said, adding that unsanctioned transplants occur in other parts of the world as well.

Millis and other doctors hope to improve China’s system by engaging with health officials they see as receptive and willing to consider reforms.

In the Canadian case, the Transplantation Society was alerted soon after the patient returned to Canada and told his doctors he had purchased a kidney and required follow-up care. The society sent a letter to Huang calling for an investigation just ahead of its annual global meeting in Hong Kong.

What happened next could be considered a positive sign by those working with China. Huang said Chinese officials revoked the licenses of the surgeon and the hospital, and a criminal investigation was launched into the surgery.

O’Connell said the group told Chinese officials, “This is a detriment to what you’re trying to achieve, and you need to act.”