Immediate recall of No. 8 plates ordered 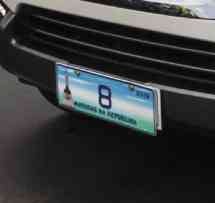 Speaker Pantaleon Alvarez has launched a crackdown on the abuse of special protocol license plates after some vehicles marked with “8” were seen parked outside sleazy places.

House of Representatives Secretary General Cesar Pareja said that Alvarez “has given instructions for the immediate recall of protocol plates issued during the 16th Congress and earlier.”

Pareja said Alvarez was disturbed by news that some vehicles with number “8” license plates “have been spotted in indecent places or figured in crime-related activities.”

Alvarez issued the memorandum on Aug. 24, 11 days after four vehicles—a Ford Expedition, a Hyundai Starex, a Jaguar and a Toyota Avanza—with  special congressional plates were spotted parked at a cybersex den in Pasay City during an operation by the National Bureau of Investigation.

“In view of this development, kindly turn in these car plates to the Office of the Secretary General for proper acknowledgement,” Pareja said.

Pareja, however, could not say how many license plates had to be recalled or who among the lawmakers owned the vehicles. At present, retired or inactive lawmakers and their staff have not been compelled to turn in their old protocol plates.

The move was meant to ensure that only legitimate representatives would use these low-numbered plates. Alvarez would continue to issue a fresh batch of number “8” plates to members of the 17th Congress.

“We should include 17th Congress. We don’t need ‘8’ plate to serve our constituents. If they are really serious about this, they  should pass my bill banning the ‘8’ plate to punish those would use this,” Tiangco said.

In House Bill No. 413, Tiangco said lawmakers should follow the law and set an example to the public.

Tiangco wanted the special protocol plates banned because  “these has always been associated with privilege and abusive behavior exhibited by individuals driving or using these vehicles, whether government officials or persons posing as such.”

Under Executive Order No. 400 signed by then President Gloria Macapagal-Arroyo in 2005, only two pairs of the low-numbered plates would be allocated to select officials except for the President (license plate “1”), Vice President (“2”), Senate president (“3”), House speaker (“4”) and chief justice (“5”).

Senators (“7”) and representatives would be assigned no more than four pairs of low numbered plates.

MMDA favors proposed ban on solons’ use of ‘8’ license plate