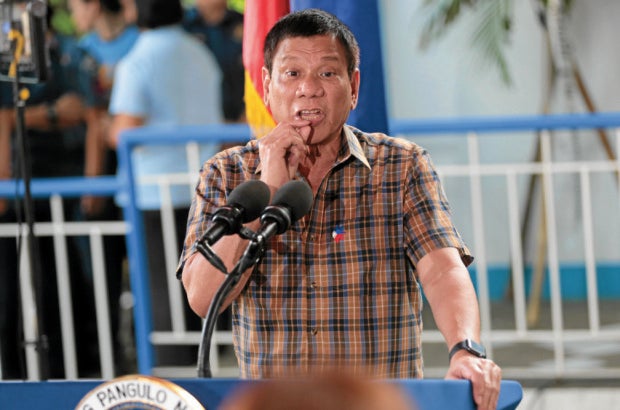 President Rodrigo Duterte answers questions from reporters during his visit to the wake of Senior Insp. Mark Gil Garcia at the Rizal Provincial Police Office in Taytay, Rizal, on Aug. 24. GRIG C. MONTEGRANDE/INQUIRER

DAVAO CITY—I’m the President, you fool!

President Rodrigo Duterte chided yet again the United Nations and all the other critics of his administration’s unforgiving campaign against illegal drugs, which has claimed the lives of some 1,700 drug personalities and triggered condemnation from international groups.

Delivering his usual expletive-laced speech before the military here on Friday, the President said the world body broke protocols when it issued a statement expressing concern over the unabated extrajudicial killings which characterized his war on drugs.

“When I was mayor, you can really criticize me … call me names. But these dimwits forgot that I’m now a President and I represent a country,” Mr. Duterte said at the 10th anniversary celebration of the military’s Eastern Mindanao Command at the Naval Station Felix Apolinario.

“Do not go outside to the media and start blabbering your mouth because I represent a sovereign state,” he continued.

The Chief Executive, who earlier threatened to pull the Philippines out of the United Nations, said he did not care about the views of human rights advocates and experts from the United Nations on his controversial antidrug campaign.

“My business is to protect the people of the Philippines and keep intact the integrity of the republic. That is my solemn and sacred duty,” he said.