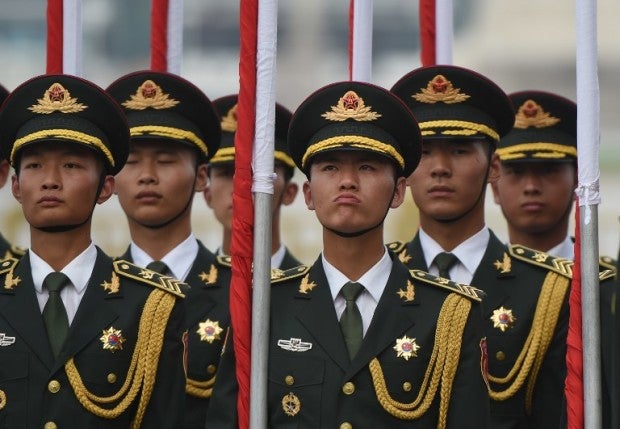 Members of a Chinese military honor guard prepare before taking part in a welcome ceremony for Greek Prime Minister Alexis Tsipras outside the Great Hall of the People in Beijing on July 4. AFP

BEIJING—China’s military will provide training for Syrian armed forces, a spokesperson for Beijing’s defense ministry said on Thursday, adding it would take place on Chinese soil.

Beijing is a longstanding backer of the Syrian government of Bashar al-Assad, which has engaged in a bloody war that has left more than 290,000 people dead and displaced millions since it began in 2011 with the brutal repression of antigovernment demonstrations.

“The Chinese military will provide the Syrian side with medical and nursing professional training,” defense ministry spokesperson Wu Qian told reporters at a monthly briefing.

The training would take place in China, he added, and was intended “to ease the humanitarian crisis in Syria.”

The Chinese military has already provided Syrian authorities with medical equipment and medicines “to help reduce the humanitarian suffering of the Syrian people,” Wu said.

“For a long period of time, China and Syria have helped each other. And China has been pushing for a political solution of the Syrian conflict and we have always supported the independence of Syria,” he added.

As well as supporting Assad’s government, Beijing is close to Moscow, which has carried out strikes on rebel-held areas of Aleppo, as have Assad’s forces.

After Guan’s visit to Damascus, China’s state broadcaster questioned the authenticity of a harrowing video showing a stunned-looking four-year-old boy covered in blood and dust after an air strike in Aleppo, alleging it may have been faked as part of a Western “propaganda war.”

The footage brought worldwide attention to the plight of children in the bloody siege of the city, and sparked diplomatic disagreement, as Russia denied carrying out the attack, and Chinese media said the group that shot the video had links to the British military.