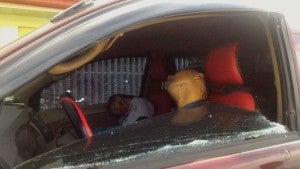 “He was on our drug watch list as a level 2 high value target. This means, mataas siya (he’s high up in the rankings). He belongs to the Espinosa Drug Syndicate,” Beltejar said.

Bato handled not only the cases of both the elder Espinosa and his son, Kerwin, who was described as the biggest drug lord in Eastern Visayas, but also all drug-related cases of the members of the syndicate.

“In all our custodial debriefing report, his name always appeared on the list,” he said.

Bato, 48, was shot dead on Tuesday while driving his pick-up at Barangay 95, Lumbang II along Calanipawan.

Gunmen on board a motorcycle and a white pick-up fired at his vehicle, which slowed down due to a road construction.

Also killed was a 19-year-old girl (not 15-year-old girl as earlier reported), Angelika Bonita, who was sitting on the front passenger seat.

As of Thursday, the police were still determining the identities of the gunmen and the motive of the killing although investigators didn’t discount the possibility it was drug-related.

Beltejar said he felt bad over the killing of Bonita who just happened to be in the wrong place at the wrong time.

He asked those who witnessed the shooting to help them so they could identify the gunmen.

“We will exert all effort to get witnesses,” he said.  SFM/rga