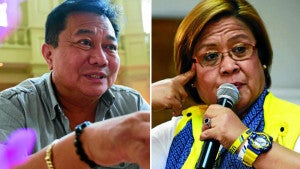 MANILA — The House of Representatives is not out to get Sen. Leila De Lima and will accord her the proper respect during the planned inquiry into the proliferation of drugs at the New Bilibid Prisons under her leadership, according to Speaker Pantaleon Alvarez.

“We will not force her to attend [the congressional inquiry]. We have what is called inter-parliamentary courtesy. We will give her that. We respect that,” the House leader and close friend of President Rodrigo Duterte said on Thursday.

Speaking to reporters on the sidelines of a House budget hearing, Alvarez said the upcoming House probe would focus on reports of the activities of drug lords in the national penitentiary during De Lima’s tenure as Justice Secretary when she had supervision over the Bureau of Corrections.

“This is not personal. Why should we make this personal with her?” he said, noting that his original resolution seeking the congressional inquiry in aid of legislation “did not even mention her.”

“It’s clear we are investigating the proliferation of drugs under her leadership,” Alvarez told reporters.

He said the concerned committees, including one on dangerous drugs, would invite everyone involved, possibly including drug personalities.

“We will invite who is connected or involved in the issue so we get a complete picture… Of course including the Secretary of Justice,” Alvarez said.

On Tuesday, De Lima said she had no plans of attending the House inquiry.

“I don’t think they have a legitimate matter to be a subject of an inquiry in aid of legislation,” the freshman senator said.

As justice secretary, she led several raids at the NBP that led to the dismantling of luxury villas and the confiscation of contraband from high-profile prisoners.

Alvarez said there would be no duplication of the ongoing Senate probe on extrajudicial killings by the police and government forces of suspected drug pushers and users.

“The Senate is investigating summary killings. What the House will investigate is drugs in Bilibid. There’s no duplication here,” he said. De Lima heads the Senate probe.  SFM/rga