Five beachgoers die in Britain on hottest day of year 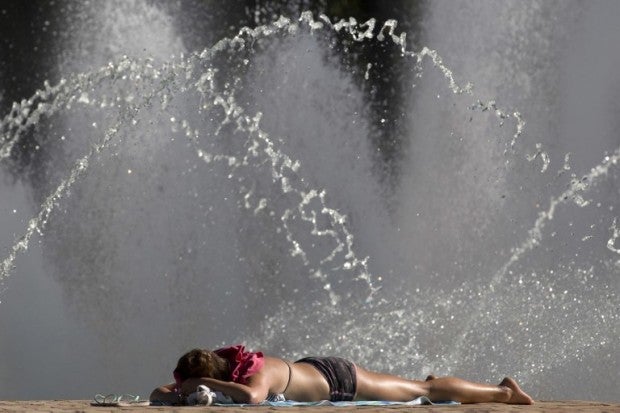 A woman sunbathes next to water fountains in Battersea Park in London on August 23, 2016, as blue skies and warm temperatures sweep the capital. AFP PHOTO

LONDON, United Kingdom — Five beachgoers died as Britain sweltered on the hottest day of the year Wednesday, officials said, bringing to 12 the number of people to have perished in the past week.

Millions have headed to the coast to escape a heat wave that has hit towards the end of the school holidays and officials have warned holidaymakers to stay at a safe distance from the water.

The bodies of two men were found at Camber Sands, southeast England, hours after three men died after being pulled from the sea.

The cause of death was not immediately given.

Police said emergency services were called to the beach in the early afternoon after the first person was spotted in the sea.

Two others were seen in difficulty and brought ashore, but despite rescue efforts all three men died.

“This has been an incredibly tragic situation. At this stage we are doing all we can to establish who the men are and to identify next of kin,” police Chief Superintendent Di Roskilly said in a statement.

Roskilly added that authorities were still trying to establish what happened, with no information given as to the identity of the victims.

The coastguard and police were not immediately available to comment on the circumstances of the deaths, which came on the hottest day of the year with temperatures reaching 33.9 Celsius (93 Fahrenheit).

Britain’s heat wave has come during the school holidays and prompted authorities including the country’s lifeboat charity (RNLI) to issue safety advice.

The Camber Sands deaths follow seven drownings since Friday, the majority in southern England and two in Scotland.

A two-year-old girl died on Tuesday in hospital after being rescued on Friday in Newquay, a popular surfing spot in southwest England. Her father also drowned after being caught in rough seas.

A woman died on Sunday off Jersey, one of the Channel Islands, the same day a man drowned in the English seaside town of Poole.

A day earlier a windsurfer died off the coast of Essex, southeast England, while a mother and her son drowned in Aberdeen in Scotland.

Following the weekend accidents, beachgoers were told to heed warnings from lifeguards.

“What should be an enjoyable experience could so easily take a traumatic turn, so please do listen to warnings and stay at a safe distance from the water,” James Instance from the coastguard said in a statement issued on Sunday.