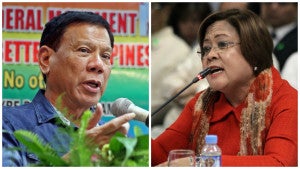 MANILA — President Duterte kept up attacks, on Wednesday, against his fierce critic Sen. Leila de Lima, insisting she was receiving money in the illegal drugs racket.

Mr. Duterte, speaking to reporters in a media interview in Taytay, Rizal, said De Lima had allowed the drug trade to proliferate in the New Bilibid Prison and got something in return.

“She was on the take. She could not have allowed these things to happen for nothing. You must be kidding,” he said.

“She facilitated everything for money,” he later added.

He also alleged that De Lima’s “sexual escapades” had led her to violate the law. At one point, Mr. Duterte resorted to coarse language, saying De Lima’s weakness for “chuk-chak” (a Filipino slang for sex) corrupted her work in government.

“What is really sad for this country, here is a woman posturing [herself] to be a crusader for good government. But because she could not stop her immorality— well, to De Lima’s credit she is legally annulled like me and is a bachelorette— but her sex escapades led her to commit several serious violations of law,” he said.

Earlier, he alleged that De Lima’s driver, who was also her lover, had collected payoffs for her, and that she had gifted him with a house funded by illegal drugs.

On Wednesday, he claimed she had a new boyfriend, but said the new guy did not have involvement in the illegal drug racket.

He identified her supposedly new boyfriend as a certain “Warren” who served as her motorcycle-riding escort.

He said he learned about the matter from former Metro Manila Development Authority chief Francis Tolentino.

The President added De Lima was angry at him because he discovered her activities, including her personal relationships.

He said that while she denied involvement in the narcotics racket, she did not deny the allegations about the relationship.

Mr. Duterte was in Taytay, Rizal, to visit the wake of Senior Inspector Mark Gil Garcia, chief of the special operations unit of the Rizal provincial police, who was killed in a drug buy bust operation.  SFM