In other news: Those to testify vs 'narco-generals' get protection; governor felt alluded to by Duterte rushes to DOJ
By: Estrella Torres - Reporter / @StarTorresINQ
Philippine Daily Inquirer / 08:06 PM August 24, 2016 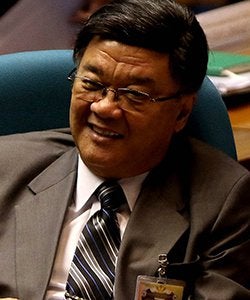 MANILA — Justice Secretary Vitaliano Aguirre II said up to six witnesses have given testimonies linking Senator Leila de Lima with drug lords inside the New Bilibid Prison (NBP) while those who would testify against five police generals tagged by President Duterte as drug syndicate protectors have been admitted to the Witness Protection Program of the Department of Justice.

Aguirre said the witnesses against De Lima included  NBP inmates, guards and people close to De Lima who have already executed sworn statements at the Department of Justice.

“The President has a wide source of intelligence (information) about what he was saying so perhaps my own sources are not even 1/10th of his own sources,” said Aguirre in a chance interview Wednesday at the EU-Philippines Justice Support program launch in a hotel along Ortigas Ave., Pasig City.

“We will present our witnesses to the House investigation. There will be a House Investigation on the proliferation of drugs at NBP,” said Aguirre.

At the same time, witnesses linking the five generals of the Philippine National Police to drug syndicates have already been placed under Witness Protection Program (WPP) of the DOJ.

The National Police Commission has set proceedings on the administrative charges against the five generals.  The proceedings run parallel to the investigation of the five for criminal charges that would be handled by the Office of the Ombudsman.

The gathering of evidence against officials with links in the drug syndicates at NBP has been proceeding smoothly, said Aguirre, as witnesses continued to present themselves at the DOJ to execute sworn statements.

As to De Lima’s former driver Ronnie Dayan, who was tagged by the President as the bagman of drug money for De Limas, Aguirre said: “ Yes, he (Dayan) collects drug money from high profile drug lords (at the Bilibid compound).”

He said witnesses told the DOJ that sometime in June, Senator De Lima and Dayan were seen together at the latter’s house in Urbiztondo, Pangasinan.

“We are not focusing our investigation on any particular individual but definitely, when I say that we are investigating ex-officials of the DOJ that include the highest to the lowest, I mean we would do it as long as we could show that there is probable cause against them,” said Aguirre.

“We are going to file the necessary charges against them,” said the justice secretary.

Aguirre said a governor also turned over himself to the DOJ, fearing that he was the one being referred to by President Duterte as having links with drug syndicates.

Aguirre did not identify the governor or what part of Philippines he came from.

Read Next
DILG chief: Duterte strongly adheres to rule of law, due process
EDITORS' PICK
House energy committee chair Arroyo bats for cheap electricity
Why Tagle is a leading papal contender
A laptop that maximizes your WiFi so you can maximize your productivity
PH resumes talks with China on Chinese-funded transport projects
Powered by style, innovation and passion
In Borongan, nuns play hoops (not mahjong)
MOST READ
Imee Marcos bares illegal importation of white onions
Why Tagle is a leading papal contender
Zubiri on SRA mess: Shameful, disgusting
Arjo Atayde reveals proposal to Maine Mendoza was ‘more than a year’ in the making
Don't miss out on the latest news and information.