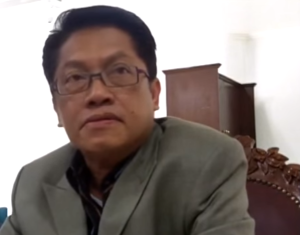 MANILA — Former Department of Justice Undersecretary Francisco F. Baraan III has asked to be accorded due process in light of President Rodrigo R. Duterte’s statement that he was among the officials involved in the illegal drug trade in the New Bilibid Prisons.

In a statement on Wednesday morning, Baraan said a formal complaint would allow him to present his side.

“I respect our President, but I am powerless before him. All I ask is fairness and due process, a chance to vindicate myself in a formal proceeding,” Baraan said.

He added that the drug accusation “contradicts the deepest Christian values I hold dear.”

“I know myself, and in due time the truth will prevail,” he said.

At the same time, Baraan said that he was never the undersecretary-in-charge of the penitentiary in Muntinlupa City.

He said he only exercised limited administrative supervision on the Bureau of Corrections, a DoJ-attached agency that has been governing the NBP and the country’s six other prison facilities.

“I did never oversee, either on the ground or from a distance, the prison operations in BuCor’s seven penal colonies, more so the National Bilibid Prison in Muntinglupa,” he said.

A typical day in the office, he claimed, saw him reviewing BuCor documents and contracts endorsed by the Technical Services. He would then countersign the documents for the justice secretary’s final signature.

“That takes just a few minutes. Then, for BuCor, my task is done that day,” he said.

He also acted in a similar capacity when it came to other DoJ-attached agencies, including the Board of Pardons and Parole, Parole and Probations Administration, and the Office of the Government Corporate Counsel.

Baraan said his other tasks included resolving petitions for review (appeals against the prosecutors’ findings raised before the DoJ), attending meetings, and receiving foreign guests.

“I am one of the members of the official Philippine panel that successfully negotiated the EDCA (Enhanced Defense Cooperation Agreement) with the US panel,” he added.

Duterte confirmed on Wednesday that Baraan was one of the DoJ officials included in his matrix of the “Muntinlupa connection,” where former Justice Secretary and incumbent Senator Leila M. de Lima was the highest-ranked official.

Duterte aired his recent accusations against De Lima as the neophyte senator began a legislative inquiry into the alleged extrajudicial killings and police excesses associated with the government’s campaign against illegal drugs.  SFM