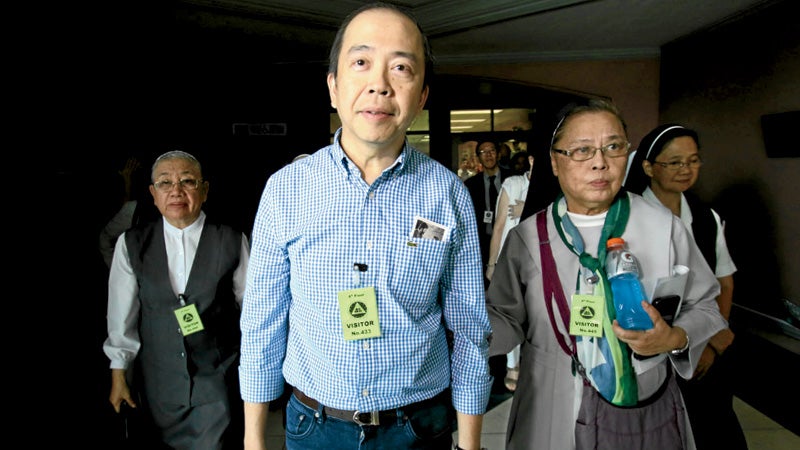 CONVICTED Accompanied by nuns, Rodolfo “Jun” Lozada, the whistle-blower on the scuttled $329-million NBN-ZTE deal, leaves the court which found him guilty of graft. RICHARD A. REYES

THE REVERSAL of fortunes is almost complete.

Accuser Rodolfo “Jun” Lozada is about to be sent to prison. Flanked by a group of nuns, he walked out of the staff room of the Sandiganbayan Fourth Division a defeated man.

By contrast, former President Gloria Macapagal-Arroyo has been absolved of plunder and released from hospital detention, while former Commission on Elections Chair Benjamin Abalos has been acquitted of a graft charge.

Lozada, the engineer who blew the whistle on the scuttled $329-million National Broadband Network (NBN) deal with China’s ZTE Corp., was sentenced on Tuesday to between six and 10 years in prison over a parcel of land he awarded to his brother in 2007 as president of the state-run Philippine Forest Corp. (Philforest).

He was convicted on a charge of violating Section 3(e) of the Anti-Graft and Corrupt Practices Act for granting the leasehold rights over a 6.599-hectare land in Antipolo City to his brother Jose Orlando Lozada under Philforest’s Lupang Hinirang Program, which awarded idle public lands to qualified bidders.

“When you have an opponent and your opponent is winning, then it means only one thing―you’re losing,” Lozada told reporters with a rueful smile. “Even Pilate knew Christ was innocent, but because of political considerations, he had to wash his hands and crucify him.”

His conviction contrasted with the recent legal victories of the people he once accused of conspiring to steal from government: Arroyo, now a deputy speaker and Pampanga representative, and Abalos.

Arroyo was absolved in July by the Supreme Court of plunder in connection with the alleged misuse of state lottery funds and released from hospital detention, while Abalos was acquitted by the same Sandiganbayan court in a separate graft charge for allegedly brokering the NBN project with China.

Both, however, are still facing other graft charges in the Sandiganbayan in connection with the NBN-ZTE deal. Lozada is a state witness in those cases.

For the time being, Lozada remains a free man.

The antigraft court permitted him to post bail―double the P30,000 he paid before the trial―while his lawyers prepared a motion for reconsideration. He was given 15 days to appeal the decision.

Lozada admitted that the reversal of fortunes between the accuser and the accused left him in low spirits.

Read: WHAT WENT BEFORE

He said he already had an inkling of what might happen upon learning that Arroyo was named a deputy speaker shortly after resuming her congressional duties after a protracted stay under hospital arrest at Veterans Memorial Medical Center in Quezon City.

“When I heard it happened, I was already concerned. I could almost feel it coming. That’s how it is,” Lozada said.

Lozada’s brother, also a Philforest consultant at the time, was convicted on the same charge of “causing any undue injury to any party, including the government, or giving any private party any unwarranted benefits, advantage or preference in the discharge of his official administrative or judicial functions through manifest partiality, evident bad faith or gross inexcusable negligence.”

But Lozada was acquitted on a separate charge of violating Section 3(h) of the graft law. That provision penalizes public officers for “directly or indirectly having financing or pecuniary interest in any business, contract or transaction” by the government.

In a decision written by Associate Justice Geraldine Faith Econg, the Sandiganbayan said it believed there was conspiracy between the Lozada brothers “so that the lease of idle public lands accused Orlando applied for would be awarded to him.”

The court noted the discrepancy between what Lozada told a Senate investigation in August 2008 on the ZTE deal and what he later testified during trial.

Upon questioning by Sen. Miriam Defensor Santiago, Lozada admitted to awarding the leasehold rights to his own corporation, acknowledging that his action was one of the “things I did in my life that, I guess, upon reflection, I would lose respect [for] myself.”

During the trial, Lozada denied awarding the leasehold right to his brother, the court noted.

He argued that what was issued was only a notice of award, which was to notify the applicant that his application was being reviewed “and its issuance comes before the award of leasehold rights.”

Lozada noted that he even asked the Commission on Audit in February 2007 that a resident auditor be assigned to Philforest, a request that the agency could not meet.

But the court said the prosecution was able to prove satisfactorily that Lozada’s brother was issued a notice of award “despite the fact that he did not participate in the procedure for the prequalification, auction and award as laid out in the terms of reference.”

In allowing his brother to apply for tenurial rights under the Philforest program, the court said, Lozada “acted with manifest partiality and evident bad faith.”

“All these acts taken together show the common criminal design of the two accused,” the court said.

In 2007, Lozada, a technical adviser to then Socioeconomic Planning Secretary Romulo Neri, exposed the lobbying efforts of Abalos to secure the overpriced $329-million NBN-ZTE allegedly in exchange for a multi-million commission.

The project would have interconnected government agencies nationwide via broadband technology.

The Arroyo administration was later forced to scrap the project as a result of public outrage over the allegations of overpricing and bribery of public officials.