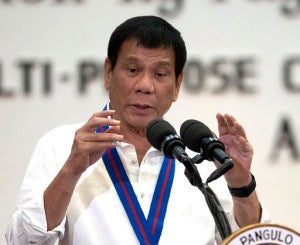 MANILA — President Duterte defended his decision to have appointees of his predecessor vacate their posts, saying he has to undertake a purge of the bureaucracy to rid it of corruption.

Mr. Duterte, speaking at the oath-taking of newly appointed generals and flag officers on Tuesday, said the culture of corruption was prevalent in the country.

“It’s really pulling us down so there will be an ongoing purge and sadly, many will be unhappy. But for the more than so many million Filipinos, I’m sure that you’ll be happy with what we in government are doing,” Mr. Duterte said.

There is disorder in the Philippines and some areas of governance are “dysfunctional,” according to Duterte.

And despite his warning for government personnel to shape up, corruption has persisted, he said.

This was the reason for his order for appointees of previous presidents to leave their posts, he added.

Duterte admitted that some of these personnel were in their positions in government at his behest, as he had been friendly with the government of his predecessors Gloria Arroyo and Benigno Aquino III.  SFM