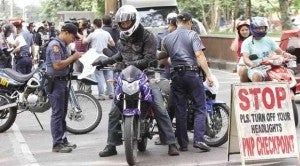 OLONGAPO CITY — A suspected motorcycle thief was killed in a shootout with local police on Sunday.

Ronaldo Bernardo died after he engaged the policemen in a gunfight at around 2 a.m. in Barangay (village) Kalaklan,  Senior Supt. Jerry Sumbad, acting director of the Olongapo City Police Office, said in a report.

Police were patrolling the area when they were alerted about the theft of the motorcycle owned by Victor Lola.

Bernardo pulled out his gun, fired at the approaching  policemen but missed, prompting the police to shoot him, Sumbad said.

According to the police, Bernardo also ranked sixth on the drug watch list of police station 1 here.