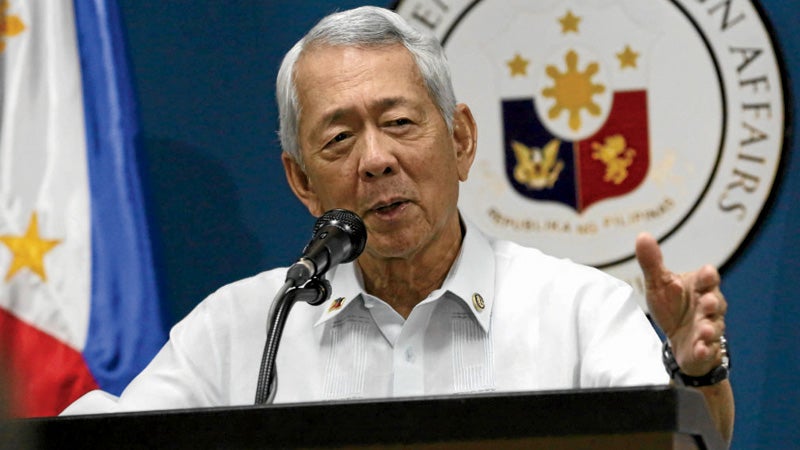 FOREIGN Secretary Perfecto Yasay Jr. said President Duterte did not make an outright threat to withdraw Philippine membership from the United Nations but merely expressed frustration at rapporteurs who criticized his administration as if it was behind the summary killings of drug suspects.

Yasay said it must be understood that the President made the statement in the wee hours while being bombarded with a lot of media questions.

“When you are tired, disappointed and frustrated and angry under these circumstances, we must give a leeway on the part of the President for this kind of reaction,” Yasay said at a press briefing on Monday.

At his two-hour early morning press briefing in Davao City on Sunday, the President described the United Nations as “inutile” and a “stupid body,” which has “done nothing” for the Philippines.

Yasay said the President did not threaten to leave the United Nations. “He (the President) expressed disappointment over the actions of these rapporteurs and then just simply said the comment that he made as a reaction to it,” Yasay said.

Agnes Callamard and Dainius Puras―UN special rapporteurs on summary executions and on the right to health, respectively―raised concern on Friday over the rapid increase in the number of people being killed, with 650 of them in the last six weeks alone, in line with Mr. Duterte’s war on drugs.

“The President has already made assurance that he will respect human rights and firmly stands against the illegal or criminal killing of people on drug-related offenses,” Yasay said.

The foreign secretary said the two UN rapporteurs should have followed UN protocols to make an official request to investigate the alleged summary killings before making a statement criticizing the administration.

“The special rapporteurs are allegedly quoting from media reports that are making assumptions that these are true and accurate,” he said.

But Yasay said these reports “do not constitute prima facie evidence of fact.”

“We do not begrudge their right to do their job, and so they must also not begrudge our country’s right and our people’s right to govern ourselves and to solve the urgent problems at hand,” he said.

He said Mr. Duterte was “extremely disappointed and frustrated with this action of the special rapporteurs in arbitrarily concluding that these drug-related killings were done by, or at the instance of, law enforcers.”

But he assured the public that Mr. Duterte was committed to the United Nations as the Philippines was a founding member. In 1945, the Philippines joined 49 other nations in signing the UN Charter in San Francisco, creating the international body.

Palace spokesperson Ernesto Abella also sought to downplay the implications of Mr. Duterte’s threat to sever the country’s ties with the United Nations, saying his tongue-lashing was nothing but “a statement of sovereignty.”

Abella maintained that the Philippines was not deserting the 193-member international body which, the President claimed, disrespected him as head of state for issuing statements about his administration’s vicious drug campaign.

The spokesperson said Mr. Duterte only wanted to reiterate that the Philippines “is a sovereign nation and should not be meddled with.”

“We are not decoupling (from the United Nations),” Abella said at a news conference in Malacañang.

“It was simply a matter of record … It was not a statement of fact that we are leaving,” Abella said.

Pressed to explain further the President’s scathing remarks against the United Nations, he said the issue of “decoupling is not … to be taken lightly.”

Abella, who appeared uneasy fielding questions from reporters, said the media should “get to the core” of the Mr. Duterte’s statements.

“It was not spur of the moment,” Abella said of the President’s remarks.

He said the President’s rebuke of the world body did not mean that his administration was turning down its support and was opposing an independent investigation of the drug killings, but a reiteration that the Philippine government could conduct its own probe as a free nation.

However, Mr. Duterte was “referring to the fact that the United Nations seems to be singling out the Philippines,” Abella said.

Asked why the President regarded the statement of the United Nations as meddling in the country’s domestic affairs, Abella said: “The United Nations, being a public institution, should have made formal representations because we also are a formal institution.”

“He was taking umbrage of the fact that the United Nations, through [its] representatives, were making public statements without having made formal representations,” he said.