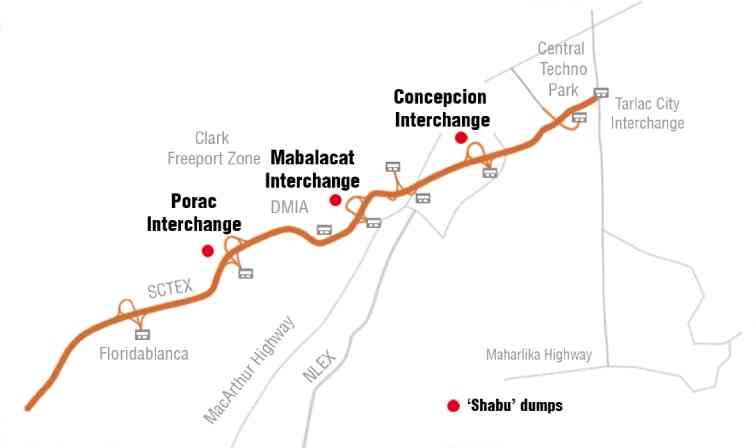 CITY OF SAN FERNANDO—The Subic-Clark-Tarlac Expressway (SCTEx) has become a dumping ground for chemicals and equipment used in the manufacture of “shabu” (methamphetamines), a Philippine Drug Enforcement Agency (PDEA) official said on Monday.

Five dumps have been found by SCTEx personnel and policemen since Aug. 8, said Emerson Margate, PDEA director in Central Luzon.

Foul smell along Km 39+640 on the southbound lane of the expressway at Barangay Babo Pangulo in Porac, Pampanga province, led authorities to a stash of chemicals, which lab tests identified as 38 liters of acetone and 7.7 liters of hydrochloric acid, which are considered essential in the production of shabu.

On Aug. 16, Porac police found chemicals which were submitted for lab tests.

Packages of chemicals and equipment were also found along Km 64+420 at Barangay Sapang Balen in Mabalacat City, also in Pampanga.

Margate said the chemicals and equipment found in Porac were similar to those seized in Concepcion and Mabalacat.

“PDEA is retracing the likely movement of the recovered chemicals and equipment … because there is a possibility that these came from one source,” Margate said in a statement. Tonette Orejas, Inquirer Central Luzon