‘Bato’ weeds out cops on drugs after exposé in Senate 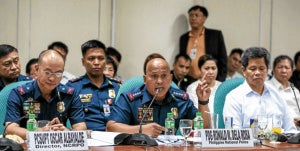 PNP Director General Ronald Dela Rosa addresses Sen. Leila de Lima at the hearing of the Senate Committees on Public Order, Dangerous Drugs, Civil Service, among others, about the spate of killings linked to the government’s war on drugs.  The inquiry is chaired by Sen. Panfilo Lacson. Beside the PNP chief are Dangerous Drugs Board Sec. Felipe Rojas (R) and Chief Supt Oscar Albayalde (L).
INQUIRER FILE PHOTO/LYN RILLON

The PNP chief vowed to bring to justice those in the force involved in the illegal trade.

Speaking to reporters after a four-hour inquiry into the spate of drug-related killings, Dela Rosa said he would readily order the police officers ‘restricted’ to police camp.

“We will restrict them in the camp or put them in Camp Crame to investigate them. We will summon them immediately,” said Dela Rosa.

If the investigation found that the entire Antipolo City police station was involved, Dela Rosa said he would relieve the entire roster of policemen.

Witness Mary Rose Aquino has said police officers were the ones who supplied drugs to her late parents, Rodelio and Rosalie Campos, who were killed in separate police operations in June.

She said her parents left their home on June 20 to remit P50,000 in cash to a group of police officers who have been supplying them drugs. She learned two days later that they were already dead.

Aquino, who appeared at the Senate inquiry wearing a hooded sweater, sunglasses and a hanky covering her mouth, said she knew of the involvement of at least 40 officers in the drug trade.

“They bring my Papa along in their raids.. The drugs they confiscate, they ask my Papa to sell,” she told an inquiry of the Senate committee on justice and human rights.

She testified  seeing the police officers in pot sessions at their family home in Antipolo City.

“They bring drugs for my parents to repack. And then they go upstairs, my Mama asks us to come down. I see my Mama and Papa repack while the police do drugs,” Aquino said, adding that the police would be even be in uniform in their sessions.  SFM/rga