Next from Duterte: More judges, cops in drugs; new info on ‘Napoles scam’ 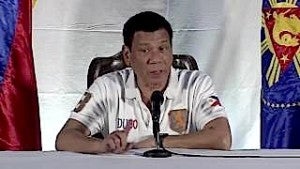 DAVAO CITY – President Duterte has called for a “revisit” of the corruption case involving Janet Luy Lim-Napoles, the businesswoman believed to have masterminded the Priority Development Assistance Fund scam, saying he has some revealing things to say about the case.

“The Napoles case deserves a second look because it involves corruption,” Duterte said even as he promised to name  the policemen, police officers and judges allegedly involved in the illegal drug trade.

“On the second round, I’d be mentioning the names of the police, most of the senior officials of police and some judges, but in between this controversy, I will now raise again the Napoles issue,” Duterte said during his press briefing on Sunday (Aug. 21).

He said the first Napoles investigation uncovered only the tip of the iceberg and that the Filipino people deserved more.

“I have some revealing things to tell you, but you just wait,” Duterte told reporters, refusing to disclose further details.

“If that’s the only thing I have to do until end of my term, I will have to do it, I’ll pursue this singular task of giving you the truth.”

“Billions and billions of pesos lost and we’ve been able to put only several lawmakers inside (the prison), but only because the charges were non-bailable,” he said.

“Eventually, we have to reckon whether they’d be put in prison with finality or acquitted.  In the meantime, they’re just there in prison, that is not enough vindication for the Filipino people, let us revisit the Napoles case,” Duterte said.

He said one of the things that had angered him and prompted him to run for  President was the injustice committed against ordinary Filipinos — people being framed and harassed in the airports with bullets placed inside their bags, and arrested — while plunder was being committed by the powerful in government.

“I was mad at the government,” he said, as he vowed to do everything to fight corruption.  SFM/rga