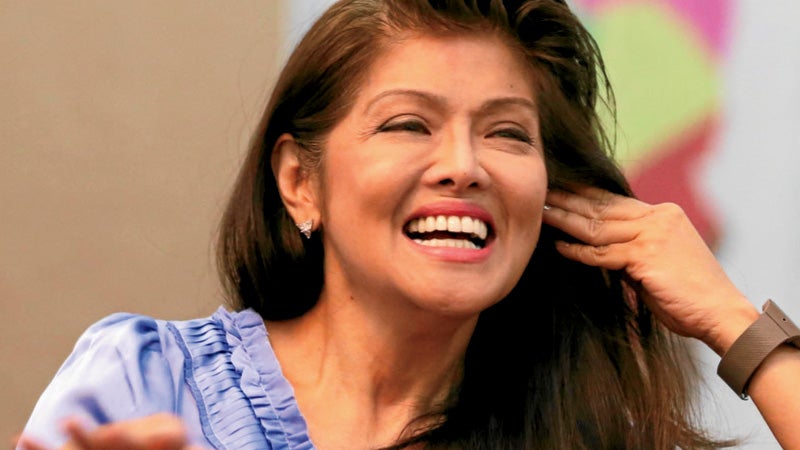 IF THERE’S a “horror roll,” there should also be an honor roll.

Ilocos Norte Gov. Imee Marcos, a daughter of the late dictator Ferdinand Marcos, is among the 10 governors to be cited by the Duterte administration for stemming the illegal drug trade in their provinces.

Interior Secretary Ismael Sueno has submitted the list, a copy of which was obtained by the Inquirer on Sunday, to Malacañang ahead of President Duterte’s plan to name in public the second batch of elected officials, judges and policemen with alleged links to the narcotics trade.

It was not clear, however, why Marcos and Dy were on the list, as the Department of the Interior and Local Government (DILG) had ruled that officials belonging to political dynasties should be automatically disqualified.

“[T]he notion [is] that they control much of what is going on around them in their locality. Any information deemed detrimental to their image might be suppressed,” the DILG said in a briefing paper.

“As we utmostly condemn the alleged narcopoliticians, we should also be celebrating these provincial chief executives for showing exemplary management prowess and strong character in thwarting illegal drugs in their territory,” Andanar said in a text message.

According to Sueno, the governors were chosen in a three-stage screening process conducted by the DILG.

From the initial names of 41 candidates, the list of honorees was trimmed to 25 during the second stage.

The governors of 41 provinces that had been previously awarded with the DILG’s Seal of Good Local Governance were automatically listed in the first stage.

Among the criteria the DILG used in the first round of screening are the provincial government’s record in good financial housekeeping, disaster preparedness, social protection and environment management.

The governors were also judged according to their relationship with the business community and their record in ensuring peace and order in their provinces.

In the second stage, six of the governors were removed from the list, including some who are facing charges in the Office of the Ombudsman and some who belong to political dynasties.

“Media reports are also taken into consideration, along with feedback from residents about the personality or character of the concerned official,” the DILG said. “Their circle of friends and relatives with negative records are also given attention.”

Only 25 governors made it to the third and last stage of the vetting, where DILG field personnel were given the task of providing feedback about the performance of the local officials.

Interior Undersecretary Austere Panadero ordered the screeners, “When in doubt, don’t give any recommendation at all.”

“Any hint or rumor regarding drugs or illegal gambling links were considered,” the DILG said.

While some of those to be honored are governors of  provinces that are home to people who have been publicly named by the President as narcopoliticians, Sueno said they should be recognized for their “relentless … antidrug campaign efforts.”