Duterte threatens to pull PH out of UN

PRESIDENT Duterte on Sunday threatened to pull the Philippines out of the United Nations as he launched another profanity-laced tirade against the world body for criticizing his ruthless war on drugs.

More than 1,500 people have been killed since Mr. Duterte took office on June 30 and immediately launched a take-no-prisoners crackdown on illegal drugs, drawing fierce criticism from the United Nations and human rights groups.

A lawyer notorious for an acid tongue, Mr. Duterte has repeatedly told the United Nations not to interfere, calling the world body “stupid” for its criticisms.

After the UN special rapporteur on summary executions, Agnes Callamard, suggested last week that Philippine officials could be held liable for the killings, Mr. Duterte stepped up his rhetoric.

“Maybe we’ll just have to decide to separate from the United Nations. If you are that rude, son of a bitch, then we’ll just leave you,” Mr. Duterte said in a news conference in Davao City that started about 1 a.m. on Sunday.

Mr. Duterte said he might even look to set up another international organization.

The United Nations, he said, should return Manila’s financial contributions.

Mr. Duterte bursts out in profanities every time criticisms are hurled at his war on drugs that has no pretension to due process.

Mr. Duterte have repeatedly told police to keep up the campaign, promising them protection from prosecution.

Callamard, in a statement posted on the website of the UN High Commissioner for Human Rights, said such directives were “irresponsible in the extreme and amount to incitement to violence and killing, a crime under international law.”

“Claims to fight illicit drug trade do not absolve the government from its international legal obligations and do not shield state actors or others from responsibility for illegal killings,” she said.

The UN special rapporteur on the right to health, Dainius Puras, added that the fight against the illegal drug trade must “respect the human rights of each person.” 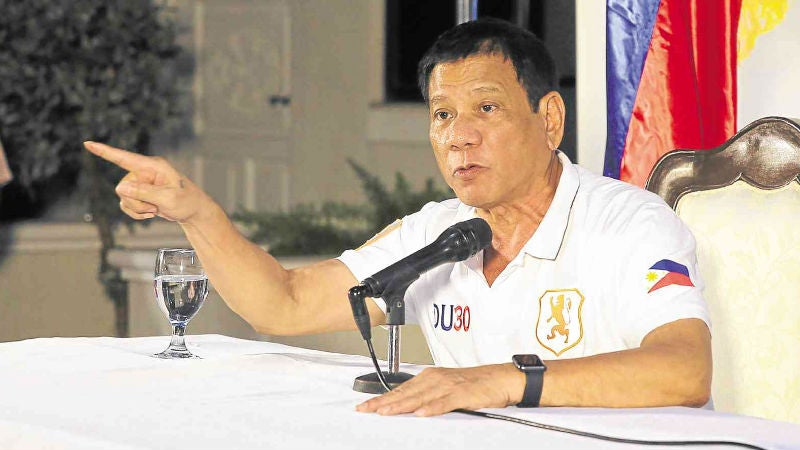 MORE TIRADES President Duterte elaborates on his accusations against Sen. Leila de Lima during a press conference at the Presidential Guest House in Davao City on Saturday. MALACAñANG PHOTO

“Fuck you, UN, you can’t even solve the Middle East carnage … couldn’t even lift a finger in Africa,” Mr. Duterte retorted then.

Last month, he said he might not honor the Philippines’ commitments to the Paris Agreement on Climate Change signed by close to 200 UN members.

UN did nothing for PH?

At his early-morning news conference on Sunday, Mr. Duterte said the United Nations had done nothing for the Philippines—ignoring its poverty reduction programs and enormous help following typhoons and other natural disasters—as he continued to rant against the world body.

“Do not shit with me. The joke is on you,” Mr. Duterte told the United Nations. “You have fallen short of the protocol needed for respect. And you want me to respect you? You must be shit.”

He continued: “You know, United Nations, if you can say one bad thing about me, I can give you 10.”

“I tell you, you are inutile, because if you are really true to your mandate, you could have stopped all these wars and killings,” he said, referring to the civil war in Syria and to the haunting picture of a 5-year-old boy, Omran Daqneesh, who was pulled from the rubble of a missile-struck building in Aleppo last week, that went viral online.

“I’m now really very serious. Do not [make allegations] by just giving a stupid explanation because you are infringing into the territory of the sovereignty of the country,” he said.

“Remember that,” he added, raising his voice. “I am the President of a sovereign country. Show your respect first.”

He went on: “You do not just throw that kind of allegation or statement without coming here [and] just relying on the reports of the newspapers. That’s what you do. Fuck, that’s what you do.”

Mr. Duterte then asked around for the nationality of the UN resident representative in the Philippines, warning that he would look for the official to tell him or her that the 193-member United Nations should “observe protocol.”

When told that the UN resident representative was an American, Mr. Duterte said: “Tell this American, show your respect first. Why are you Americans killing the black people (in your country) when they are already on the ground? Answer that question.”

“Goddamn,” he continued. “You tell that to that American. Or better still, tell him that I will pay him a visit if there is time. You just tell me where I can find him.”

Callamard accepted Malacañang’s challenge for the United Nations to investigate the extrajudicial killings, but the Palace stepped back, saying it had invited no one.

Mr. Duterte, however, dared the United Nations to send an expert to the Philippines to investigate.

Bragging about his experience in international law and the degree in foreign service that he obtained from Lyceum of the Philippines, Mr. Duterte cursed the United Nations again.

“All you do is read editorials. What have you done for the world, Mr. United Nations? How about your expert? Let me know [when he is coming] here. [I] would ask only five questions to prove that you are stupid,” he said. “I will prove to the world that you are a very stupid expert.”

Mr. Duterte said he was willing to face UN representatives in a public debate where he would teach them to count victims of illegal drugs.

“You only know how to count correctly when you are counting the corpses of criminals,” he said.

The news conference ended at past 3 a.m. Mr. Duterte stood up and he was heard cursing, “You son of a bitch. You are stupid. Dimwit.” With reports from AFP and AP