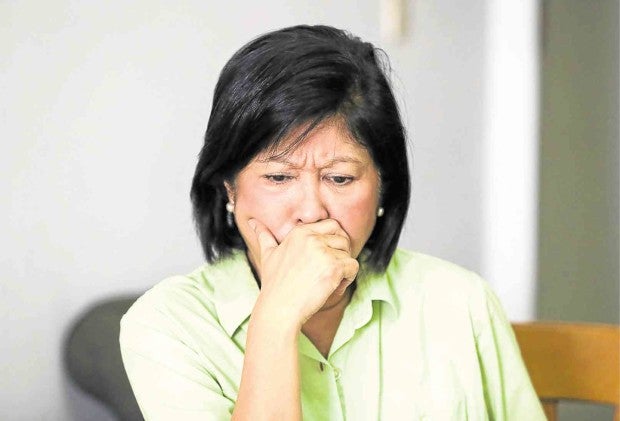 LONE EYEWITNESS Thirty-three years after, “Crying Lady” Rebecca Quijano retells her story of how a military escort shot Aquino in the back of the head. LYN RILLON

Rebecca Quijano, the lone eyewitness to the assassination of Sen. Benigno “Ninoy” Aquino Jr., was not supposed to be on China Airlines Flight 811, the same flight that carried the opposition leader 33 years ago.

Now 62, Quijano, referred to in news accounts as the “Crying Lady,” attributes to destiny her being on the same plane that brought Aquino back to the country after a three-year self-imposed exile in the United States. Aquino’s homecoming on Aug. 21, 1983, was blocked by an assassin’s bullet, even before he could touch Philippine soil.

In an interview at her San Juan home, Quijano told the Inquirer that in the years following Aquino’s death, she had to alternately maneuver through death threats and bribes, emboldened as she was by her conviction to tell what she saw through a window of that Boeing 767-209 jet: A military escort shot the senator in the back of the head.

“For everything there’s a reason. I was supposed to be on a Philippine Airlines flight to Manila from Taipei. Last minute, I told my friend, ‘Let’s change our flight. The China Airlines aircraft is much bigger,’” said Quijano, then 29.

“I did not even know at the time that Ninoy would be on the same flight,” she said.

She said she only found out about the VIP on board when they were already on the plane and a group was crowding around a passenger.

“I asked a reporter who passed by, ‘Who is that guy?’ He told me, ‘You don’t know him? He’s Ninoy.’ When I heard Ninoy, I got my camera and ran,” she said, laughing.

Quijano recalled that she was able to speak briefly with Aquino, introducing herself as the daughter of Hector Quijano, then opposition Liberal Party chair for the Bicol region, who offered his home to national party leaders campaigning in the area, including Aquino, Sergio Osmeña Jr. and Jovito Salonga.

“I met him (Ninoy) even before, when he stayed at our house in Tabaco, Albay. I asked him, ‘Why did you return [to the Philippines]? Aren’t you afraid? He didn’t say a word and gave a forced smile. You can see in his face that he was so worried,” she said.

“I saw the press chasing after Ninoy and the soldiers so I got my camera and pretended to be one of the reporters so I could follow. When they blocked the door (after Ninoy and his escorts stepped out), I ran to the business class side and looked out the window,” Quijano said.

“I looked out that window at the same time that he was killed,” she said. 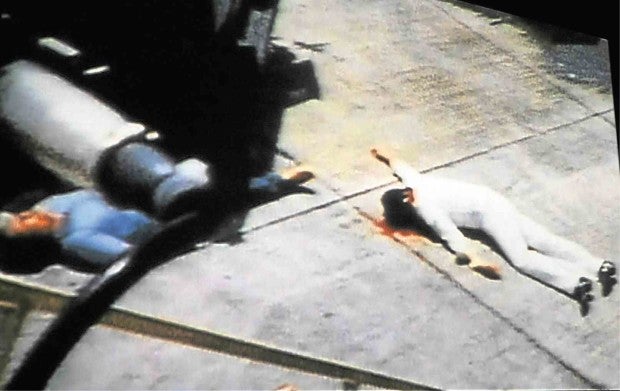 UNSOLVED MURDER The killers of opposition leader Sen. Benigno “Ninoy” Aquino Jr., shown sprawled face down on the tarmac of Manila International Airport, have yet to be brought to justice.

She said she could not help going into hysterics after that because all she could think about as she heard more gunfire was that they were going to be next.

“All the passengers ducked for cover. I just cried and shouted, ‘Why did they kill Ninoy? What is this? Those   (Aquino’s military escorts) who were supposed to protect him killed him?’ I was really in disbelief,” Quijano said.

“I experienced martial law so I knew what could happen. That it was easy for them (the military) to kill people,” she said.

When the passengers were allowed to get off the aircraft, Quijano recalled that she was still crying hysterically that she was mistaken for a relative of the Aquinos by waiting journalists, whom she addressed, saying in Filipino, “Why aren’t you in tears? They killed Ninoy.”

That was the only thing she was able to tell them because Col. Vicente Tigas, of the then presidential security command, and another man wearing a barong Tagalog held her by the shoulders and told her to be quiet or she would be in trouble.

“At that time, I returned to my senses because I realized, ‘I’m in danger.’ They got my bag and brought me to a room. I told them I just needed a drink of water and that I would be fine by myself. I was so afraid. I felt that I was going to be killed next,” she said.

When she got home, she switched on the TV and watched a press conference called by then Metropolitan Command chief Maj. Gen. Prospero Olivas, who was saying that Aquino had been shot by communist hit man Rolando Galman.

“I knew it was a military conspiracy then,” Quijano said.

When she told her sister about what happened, her sister told her to return to the United States and not to make any more fuss about what she had seen.

She was convinced to testify before the US Congress and the Sandiganbayan in 1985 by Philippine News-San Francisco editor in chief and founder Alex Esclamado and Greek-American mechanical engineer Steve Psinakis.

Asked what convinced her to testify, Quijano said, “I saw that there were many witnesses recanting their statements. I was just thinking of justice for Ninoy. So I returned here.”

“(Lawyer) Raul Gonzales said that my best protection was to come out with the truth. I was told by Atty. (Lupino) Lazaro that I had ‘salvage value’ until I testified. I rendered an affidavit and submitted it to Chief Prosecutor (Manuel) Herrera so I would no longer have ‘salvage value,’” she said.

Quijano recalled that when she testified on May 2, 1985, that she saw a soldier shoot Aquino, she had her rosary and was praying all that time that she would not be grilled on the witness stand because of a raft of fabricated charges filed against her, from car theft to estafa.

Quijano said she later found out that the defense wanted her recalled to the witness stand so they could make her an offer to recant her statement. The offer was P2 million cash, a private jet ride back to the United States and the head of her father’s killer.

Her father, Hector, was detained in Camp Crame where he allegedly committed suicide by hanging—something the family did not believe.

Instead of refusing the offer, Quijano said the prosecution lawyers advised her to play along so “they (those threatening her) would be the ones protecting her.”

She revealed that Rodolfo Jimenez, the defense lawyer the military men accused in the assassination, even briefed her on what she was supposed to say on the witness stand in June 1985 to withdraw her previous testimony.

Quijano said she was shown “her” P2 million by a middleman in his house in White Plains, Quezon City. “It was a large box of money. The box was marked Central Bank of the Philippines. He (the middleman) told me it was mine. I didn’t take it because I was just playing along.”

Grilled with a vengeance

When she finally testified and did not recant her statement, she was grilled with a vengeance by defense lawyers about her detention in Hong Kong, her criminal cases and  her being institutionalized in a mental health hospital.

“I was crying. I almost had a breakdown on the witness stand. They ganged up on me, even the three justices,” she said.

To stop the grilling, she told Head Justice Manuel Pamaran: “Your honor, even if I’m the worst person in the whole world nothing will change that it was a soldier who shot Ninoy.”

“So it was truly destiny that I saw what I did. For me, Ninoy is my hero. It is because of him that we have democracy. If he was not killed, our countrymen would not be jolted awake. His sacrifice emboldened the Filipinos,” she said. TVJ