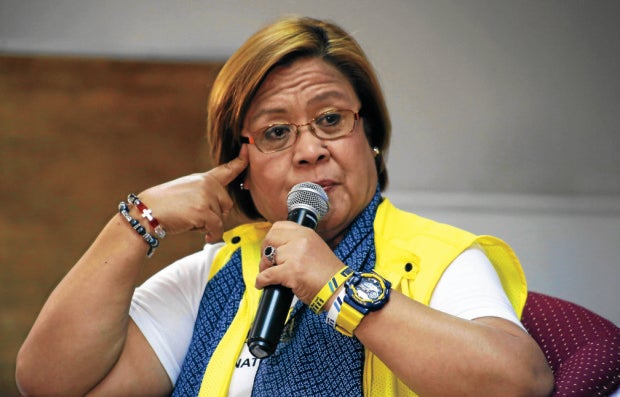 Allies of President Rodrigo Duterte in the House of Representatives have sought a “comprehensive investigation” into the supposed proliferation of drug syndicates at the New Bilibid Prison (NBP) in Muntinlupa City during the term of former Justice Secretary and now Senator Leila de Lima.

Speaker Pantaleon Alvarez and 10 other lawmakers filed House Resolution No. 105 calling for a probe on the alleged involvement of government authorities “under De Lima’s leadership” in the spread of illegal drugs in the national penitentiary.

As Justice Secretary, De Lima had control of the Bureau of Corrections.

“Now, therefore be it resolved as it is hereby resolved, that the House of Representatives direct the appropriate committee to immediately conduct a comprehensive investigation on the proliferation of drug syndicates in the NBP, including the involvement and accountability of the authorities mandated to exercise control and supervision over the national penitentiary, under the leadership of then Secretary of the Department of Justice Leila M. De Lima, and such other heads of law enforcement agencies tasked with implementing law enforcement policies particularly those in combatting the use, proliferation and trade of illegal and prohibited drugs,” the resolution read.

De Lima, chair of the Senate committee on justice and human rights, will lead the Senate investigation into the rising death toll in the administration’s war against drugs. She is facing criticisms from the President himself, who accused her of being “immoral” for her alleged affair with her driver and alleged bagman of drug money.

The lawmakers said a “continuous monitoring of the imposition of the penalties” on convicted criminals in the Bilibid was necessary to ensure that “they are totally incapacitated from engaging in any and all unlawful transactions and operations including those involved in illegal drugs.”

The House leaders noted that the operations of high-profile drug lords such as Peter Co and Herbert Colangco, who were recently named by Duterte as top drug dealers in the country, still continue in their “detention cells-turned luxury air-conditioned kubols (shelters) equipped with internet connection” despite various raids conducted by authorities in the past.

“The use of the NBP as a base for the operation of these top drug lords has been made evident during the raid operation conducted on December 2014, where makeshift “shabu” laboratories were discovered, as well as other illegal drugs and drug paraphernalia, high-powered firearms and improvised weapons, luxury watches and other smuggled items, golf carts, electric bikes, musical instruments, flat screen television sets and other appliances, sex toys and other pornographic items, as well as a stripper bar and Jacuzzi spread,” the resolution stated.

“The proliferation of illegal drug trade and other criminal activities inside the NBP created a climate of anger, apprehension and frustration among citizens who now believe that the nation is under the grip of powerful drug syndicates coddled by high-ranking authorities of the government,” it added.

Citing data from the Philippine Center for Transnational Crime and Philippine Drug Enforcement Agency, the lawmakers said illegal drugs continue to spread in more than 8,000 barangays (villages) in the country despite the police’s anti-drug policies.

“The new administration inspired an unprecedented clamor for drug policy reform and outcry for genuine public accountability and transparency among government officials and agencies mandated to enforce the law and combat criminality, in order that the people’s trust and confidence in government institutions and processes may be effectively restored,” they added.