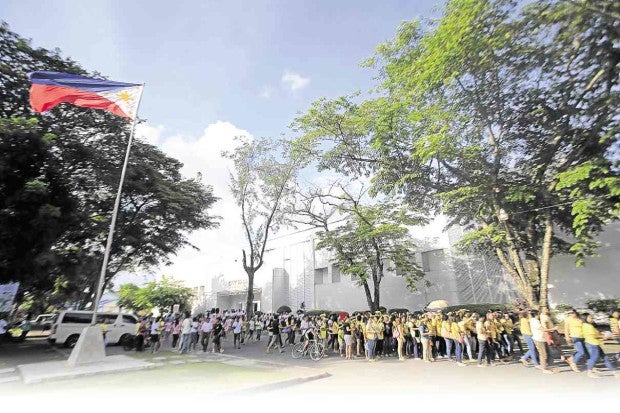 PEOPLE of Naga City join the “tsinelas” walk for the late Jesse Robredo during the commemoration of his fourth death anniversary. MARK ALVIC ESPLANA/INQUIRER SOUTHERN LUZON

NAGA CITY—Vice President Leni Robredo said the greatest contribution to government of her late husband, Jesse Robredo, is leadership that inspires people to be their best.

On Thursday, the Vice President led the commemoration of the fourth death anniversary of Jesse, a longtime mayor of Naga City, who died in a plane crash in Masbate province in 2012.

“It is a kind of leadership that inspires and brings out the best in people. [Jesse] used to say that our city became better not because he was good, but because of his colleagues in City Hall who are good,” she said.

The Vice President said her husband’s leadership was not the kind that was focused on one person, “a kind of legacy that stays on long after you are gone.”

“So if you notice, four years since my husband was gone, Naga City is still doing very well. For the second straight year, Naga City garnered the award of the most competitive city all over the country,” she said.

A crowd of at least 1,000 people, composed of city officials, students and school administrators and other civic groups, walked from the Naga City Hall wearing “tsinelas” (flip-flops) to remember the life and legacy of Jesse.

The tsinelas walk, symbolizing Jesse’s brand of leadership, humility and simplicity, ended with Mass at his tomb in Eternal Gardens where they offered flowers to the former mayor.

Legacion said the program, similar to the government’s Pantawid Pamilyang Pilipino Program, had been in place in Naga in the late 1990s, long before the national government implemented it during the administration of former President Gloria Macapagal-Arroyo.

He said program beneficiaries are given rice subsidies while students are given school supplies.

Legacion said Queen is also Jesse’s brainchild, benefiting 20,000 poor elementary and high school students. He said the program provides families of these students with cash assistance to pay for their school fees.

He said Jesse also institutionalized the transparency system of local governance, with all transactions of the Naga government posted on its website.

Legacion said Jesse, through his programs as Naga mayor, empowered citizens through a charter and allowed people’s organizations and nongovernment groups to join committees of the city council so they can participate in the decision-making process.

Kristine Cea, 18, a senior tourism student in Partido State University, said she remembered stories of Jesse sweeping the streets of Naga together with street cleaners.